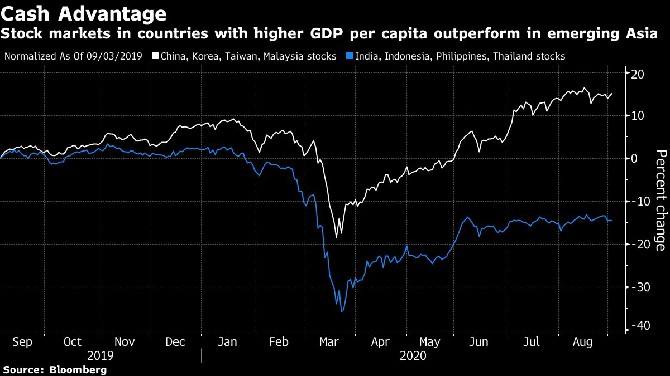 Emerging markets are being split apart by an increasingly K-shaped recovery.
Stocks and currencies from wealthier developing nations have outperformed their poorer peers since the coronavirus outbreak. The gulf may even get wider if the pandemic leads to deeper recessions in the most disadvantaged countries.
As long as the virus lasts the K-shaped divergence will continue, said Rob Subbaraman, global head of macro research at Nomura Holdings Inc. in Singapore. “In the EM world with rapidly rising debt and deep recessions, the cost of servicing debt is going to get more burdensome and we cannot rule out some financial crises or major debt restructuring.”
A Bloomberg study of 17 emerging markets has found a 42% correlation between gross domestic product per capita and stock performance since the virus-fueled risk sell-off began on Jan. 20 until early this week. The correlation between GDP per capita and currency returns was 31%.
Wealthier emerging markets have been better placed to rebound from the March sell-off due to more advanced technology and governance that have given them greater flexibility to respond to the pandemic. They have been able to limit the impact of lockdowns and social distancing, make larger fiscal responses, and are better equipped with the resources needed to curb the outbreak, such as hospitals, test centers and quarantine facilities.
Countries such as South Korea and Poland have seen the smallest increase in economic disruptions, according to an effective lockdown index compiled by Goldman Sachs Group Inc. The gauge takes into account a combination of government restrictions that suppress activity and adds social distancing numbers based on Google mobility data. There has been a negative correlation of 54% between Goldman’s gauges and per capita GDP. In turn, countries with the lowest lockdown index have tended to see the best stock market and currency performance.
The rich-poor divide among emerging markets is widest in Asia. The stock returns from the four economies with per capita GDP above $10,000 last year – China, South Korea, Taiwan and Malaysia – has been 20% above that of the nations which fall below that level, including India, Indonesia, the Philippines and Thailand. While this is partly due to the number of technology companies listed in the former countries, it is also due to the fact that authorities there have been able to spend more to reassure citizens and investors.
South Korea’s fiscal response to the pandemic, including three supplementary budgets, totals 270 trillion won ($228 billion), or about 14% of GDP, providing support to the stock market even as the local outbreak has worsened. In contrast, the Philippine government has said it’s unable to fund the 1.3 trillion pesos ($27 billion) stimulus package approved in June. The nation’s stock market is the region’s worst performer this year, dropping more than 25%.
True, some emerging-market central banks such as India and Thailand may be deliberately seeking to hold back their currencies, but this represents only a relatively small proportion of the overall underperformance.
Looking ahead, lower rates of infection, greater policy space, and stronger health services may help more affluent countries maintain their lead in the economic recovery.
Richer emerging economies are likely to gain access to effective coronavirus vaccines sooner, following the steps of wealthy developed nations. There is even a risk bigger economies will monopolize supply, a scenario that played out in the 2009 swine flu pandemic. Simon Flint & Livia Yap, Bloomberg