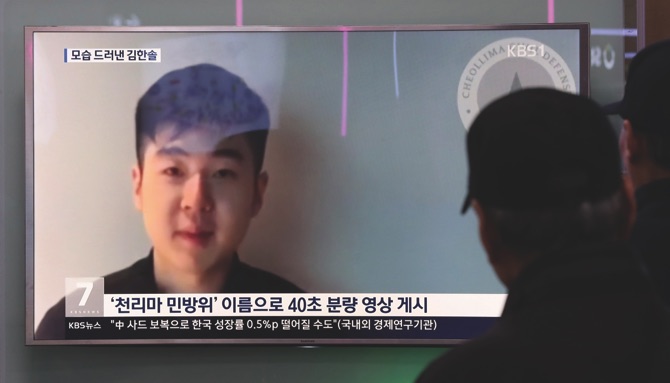 People at a railway station in Seoul, South Korea, watch a TV news program displaying a video in which a man claims to be Kim Han Sol

Some agents are being interrogated in special facilities on the outskirts of Beijing, the paper said, without elaborating on whether the other five were arrested. China’s foreign ministry didn’t immediately respond to a faxed request for comment.

Two women are currently on trial in Malaysia on charges of murdering Kim Jong Nam at a Kuala Lumpur airport in February. Kim Han Sol identified himself as Kim Jong Nam’s son in a YouTube clip in March.

South Korean government officials have speculated that Kim Jong Un was behind the murder of his half-brother, a critic of his leadership who had lived outside the country for years. Authorities in Malaysia said the two women charged with Kim Jong Nam’s murder used the chemical weapon VX in the attack, claiming they were trained to swipe the poison on the victim’s face and knew the substance was toxic. The pair have pleaded not guilty.

Kim Jong Nam isn’t the first family member to be killed since Kim Jong Un took power in 2011: he executed his uncle Jang Song Thaek in 2013 on charges of graft and factionalism. Earlier this month, the leader promoted his 28-year-old sister to the ruling party’s political wing, bringing her closer to the center of power. Kanga Kong, Bloomberg