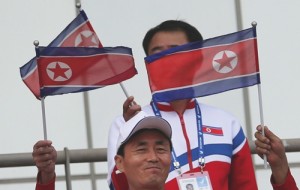 When the first world record fell at the Asian Games — to a North Korean weightlifter — elated South Korean fans pounded drums and stood to cheer.
Away from the stadiums, however, South Korean activists were launching balloons laden with anti-North Korea leaflets over the demilitarized zone and the North’s state-run media was churning out tirades against the South’s “puppet” rulers and their unforgivable crimes.
So much for sports diplomacy.
Despite the generally warm welcome its athletes are getting in Incheon, North Korea’s participation in South Korea at Asia’s biggest sporting event isn’t making much of a dent in the two countries’ deep-rooted animosity toward each other — which appears to be just fine with the people running the show.
“It’s hard to imagine the North Korean participation at the Asian Games contributing to trust-building between the two Koreas in any meaningful way,” said Koh Yu-hwan, a North Korea expert at Dongguk University in Seoul. “South Korea has rarely used sports as a tool for its political relations with the North.”
Seoul has bigger fish to fry.
Hosting the region’s version of the Olympics, with or without the North, is another way to show off its affluence and diplomatic pull.
For Pyongyang, on the other hand, the South is merely a backdrop — deliberately kept as vague as possible. The real prize is being won back home, on the propaganda front. Having athletes winning gold on the world stage and singing the praises of leader Kim Jong Un is great for the domestic audience.
And sing the leader’s praises they have, without fail, after each gold medal.
“The respected marshal told us that if we come to the games with ideology, we could crack a stone with an egg,” Om Yun Chol, the North Korean weightlifter who set the world record on the games’ opening day, told a news conference yesterday that was attended by a large gathering of South Korean media.
“The great care of the respected Marshal Kim Jong Un has given us the ability to be champions today,” added teammate Kim Un Guk, who emerged with two world records in weightlifting on Sunday.
Both athletes — and every other North Korean who has appeared before reporters — studiously avoided making any comment about their impressions of South Korea before being hustled out of the news conference, which was scheduled to last an hour but was cut short after only 20 minutes.
Before leaving, however, Kim summed up very nicely the North’s inward-looking attitude toward the event.
“We don’t want anything from anybody,” he said. “What we want is to give pleasure and happiness to our people and to our Marshal Kim Jong Un.”
Back in North Korea, their accomplishments have been hailed as proof the isolated nation is a strong country armed — as Om said — with an ideological purity that makes it superior to the South, which Pyongyang ceaselessly portrays as a morally bankrupt flunky of the United States.
South Korea’s political games have gone on unabated as well.
Along with lofting anti-government propaganda over the DMZ during the games, South Korean activists used their balloons in July to bombard their neighbors with 10,000 “choco pies,” a delectable, if not terribly healthy, South Korean snack that has become highly coveted, and reportedly highly valuable, north of the border.
Pyongyang sees such activities as a particularly low blow. It has called the activists — many of whom are defectors — “human scum” and the leaflet campaign an act of war.
“It is the south Korean puppet regime which is chiefly to blame for the leaflet-scattering operation,” an unnamed spokesman for the North’s Committee for the Peaceful Reunification of Korea said in a statement Monday, adding that the “operation was conducted in the place near Incheon, where the 17th Asian Games are now under way.”
“This fact clearly proves that the South Korean puppet clique,” the statement said, is “utterly indifferent to the international games and the sincerity of the fellow countrymen participating in the games.”
Unfazed, Seoul says it has no intention of stopping private citizens from exercising their right to free expression. If North Korea has a complaint, officials say, it should make its concerns known in formal talks, which the North had refused to do.
“Sporting events can have political effects only when politicians allow them to,” said Moon Chung-in, of Yonsei University in Seoul.
In Incheon, that doesn’t seem to be anyone’s priority. Eric Talmadge, Incheon, AP