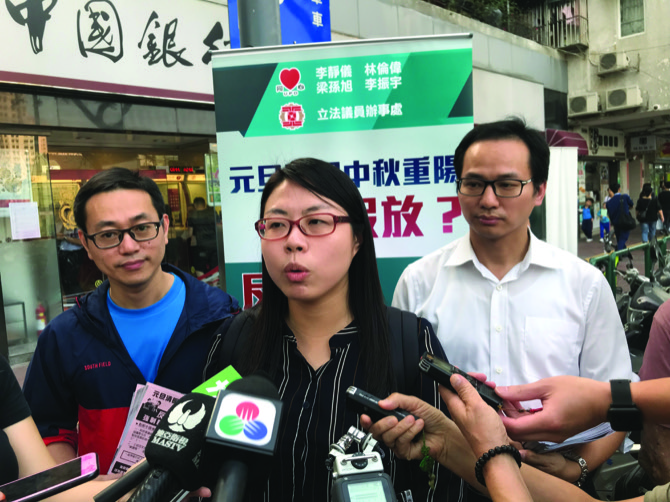 The government is being urged to cancel the holiday shift proposal in the latest Labor Law amendment.

The amendment proposed paid paternity leaves and increasing the number of days for maternity leaves, both well accepted by Macau residents.

Originally, the amendment also proposed to change three of the city’s compulsory public holidays into normal public holidays. During the public consultation, 64 percent of the public opinions opposed such a change.

This proposal suggests these three days can be taken on other public holidays and further suggests them to be normal working days. The change also means that workers will probably work on these days.

“The residents mainly worry that they only have 10 days of mandatory holidays, which is not a lot. [The residents] think that the government should not make changes to these holidays,” said Lei. “Once this change is applied, it means that although workers are required to work on these days, they will not get compensated [extra],” she added.

“[Employees think] that you [the government] either pay them or you give them the day off, not change these days to other dates,” said Lei, adding that “this will harm workers.”

“It actually means that grassroot workers will have no choice when their employers change their holidays. […] It shakes the basic bottom line of the Labor Law. This is unacceptable,” said Lei.

Besides damaging the workers’ rights, Lei also thinks that the proposal goes against the trends in Macau’s neighboring regions, mainly mainland China, in terms of paying more importance to traditiona Chinese l holidays.

In the lawmaker’s opinion, Macau is already lagging behind in terms of days of public holidays when compared to its neighboring regions.

Lei called on the government to suspend the proposal and continue to entitle Macau residents to 10 days of public holidays.