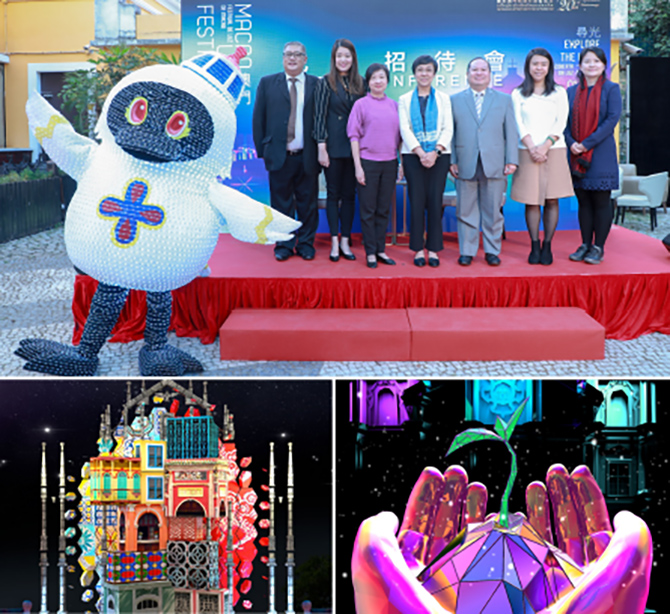 Entering its fifth year, the Macao Light Festival will be larger than ever before, covering a total of 15 locations across Macau in four different districts.

As a novelty, the festival will feature a location within the northern district for the first time, making use of former Canidrome facilities as one of the venues that will host a projection mapping performance. Other streets in the area will also be included as part of Route 1, named “Light of Age,” featuring memories of the old days in Macau and peoples’ childhoods.

According to the Macao Government Tourism Office (MGTO), the event, which is considered to be a major annual event, aims to attract international visitors in particular, and have them to stay in Macau for a longer period.

“We are trying to show Macau through [the festival] and attract tourists to stay longer and explore different areas of the city,” said MGTO director Maria Helena de Senna Fernandes. “This is one of the events that we count [on] in order to make our international branding so we can achieve our goals.”

The international presence at the event has also been heightened, as the number of non-local performances has increased from the two last year to four this year. Performances from Portugal, Spain, Japan and the nearby city of Shenzhen will join two local projection-mapping performances.

Senna Fernandes noted the importance of the inclusion of the international and non-local performances as “opportunities for exchange among local, mainland and overseas light artists, making an ongoing effort to take the performance quality and program diversity to the next level.”

Another novelty included this year is the use of the Saint Joseph’s Seminary Church as one of the venues featuring projection mappings, joining the Ruins of St. Paul’s, the Canidrome and the Pinocchio’s Restaurant building in Taipa’s Largo dos Bombeiros, next to Rua do Cunha.

The MGTO director also remarked that there will be a series of events held that will link and complement each other, attracting more people for longer periods.

Among these events, Senna Fernandes noted that the Macao International Marathon, which will also be hosted on the day the festival kicks off, and also special fireworks will be hosted during celebrations of the 20th Anniversary of the Macau Special Administrative Region.

The Macao Light Festival – Explore the Light will also promise more selfie opportunities, the director of MGTO said, adding that social media was an important vehicle for the promotion of the festival within and beyond Macau’s borders.

According to Senna Fernandes, the festival always attracts a large number of bloggers and social media influencers who promote it through photography and share their experiences of the festival, attracting others to do so.

“In previous years we had a lot of people sharing about the festival on social media platforms, and we also have a number of bloggers that [have] created some plans and routes to help other people to visit,” Senna Fernandes said, adding that MGTO followed some of the suggestions and experiences to improve routes and to create “ideal conditions for photo-taking and sharing.”

The official hopes that with a larger festival and a total of four different routes to explore, which cover a wider area of the region, people will feel tempted to stay longer and spend more time visiting the different areas.

“We have made it larger and more interesting to keep people [exploring] longer. It can’t be seen all in one day,” said Senna Fernandes.

The MGTO is also trying to boost sharing on social media via a promotion that grants gifts to those who are the most successful in posting about the festival online.

For each post that gets over 20 likes on social media, that person is entitled to redeem a gift from the Festival.

For this purpose, a mobile application was also created, allowing route navigation, commenting and gift redemption. The app is available on the App Store and Google Play Store.

The festival will be held between December 1 and 31.