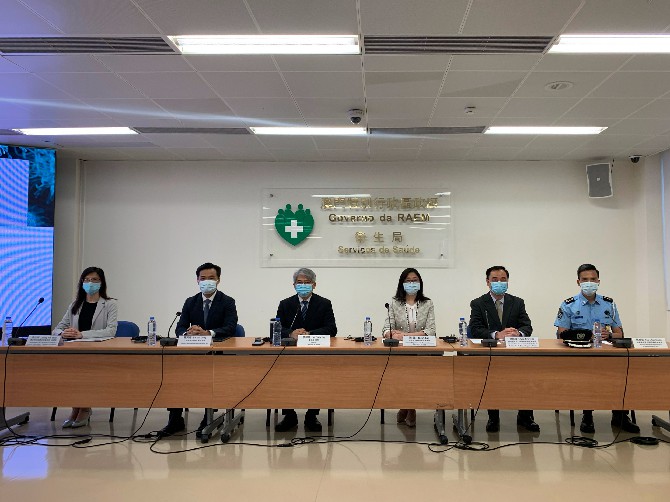 All patients diagnosed with Covid-19 have officially recovered, the Health Bureau (SSM) revealed yesterday at the Novel Coronavirus Response and Coordination Center’s daily press conference.
After a brief absence from the daily press conference in the past few weeks, SSM director Lei Chin Ion reemerged to preside over yesterday’s press conference. He said that he had returned to the panel to announce some good news.
“Our last Covid-19 patient has been discharged from hospital [yesterday] afternoon,” the director said. The patient is now in recovery quarantine at the Public Health Clinical Center in Coloane, where she was treated.
The patient is a 15-year-old girl who had been studying in the U.K. and was returning to her hometown due to the outbreak in Europe. She left the U.K. on March 16 and arrived in Hong Kong the next day, with a stopover in Kuala Lumpur, Malaysia.
She then stayed in Hong Kong for a week before arriving in Macau via the Hong Kong-Zhuhai-Macau Bridge on March 24, when she was intercepted at the border with respiratory symptoms. She was then sent to the government hospital for testing and was later diagnosed with the virus. She was hospitalized for 56 days.
“From March 15, when the second wave of outbreak started, until [yesterday], we’ve passed 66 days,” the SSM director said. “We managed to save all the patients, without any deaths, any in-house infections or any intra-medical staff infections.”
The bureau director thanked all medical staff for their contributions and work.
Yesterday was the 41st consecutive day that Macau registered no new cases of Covid-19. With all the existing patients now recovered, the so-called second wave, which mostly consists of returnees from Europe and North America, appears to have subsided in the territory.
Despite this, Lei reiterated the importance of the infection response measures currently in place. He also noted that discussions have regularly been held with authorities from Zhuhai and Hong Kong to determine the direction of future measures.
He also added that the population eligible for Covid-19 nucleic testing would be gradually expanded.
The arrival of summer this month prompted one journalist to ask the SSM when it expects public swimming pools to reopen.
Leong Iek Hou, coordinator at the Center for Disease Control and Prevention (CDC), disclosed that the SSM has been in discussion with the Sports Bureau, which oversees local public swimming pools. However, no exact date of reopening could be provided yesterday.
Even if these facilities were permitted to reopen, certain measures and restrictions would apply, according to Leong. The amount of people allowed in the facility will be lowered to avoid crowds at swimming pools.
All swimmers will need to get their body temperature measured, as well as show an acceptable Macau Health Code.
The authorities previously stated that they would monitor the cleanliness of private swimming pools. As of yesterday, Leong disclosed there have been no poor hygiene situations recorded.

The government is restarting its efforts to find hotel venues for quarantine purposes.
The only hotel currently being used as a quarantine venue is the Pousada Marina Infante, where 316 people were being accommodated as of noon yesterday.
Given changes in arrival policies, more people are entering the city, but they are still required to undergo 14-day quarantine at a designated hotel.
Inês Chan, an official from the Macao Government Tourism Office (MGTO), revealed that the government is already looking for appropriate hotel properties to accommodate the increasing numbers of entrants undergoing mandatory quarantine upon arrival in Macau.
As previously, the MGTO declined to name the hotel currently in discussions with the government. However, they did reveal that it is one of the 12 hotels previously used. The criteria for quarantine hotels have not changed. AL