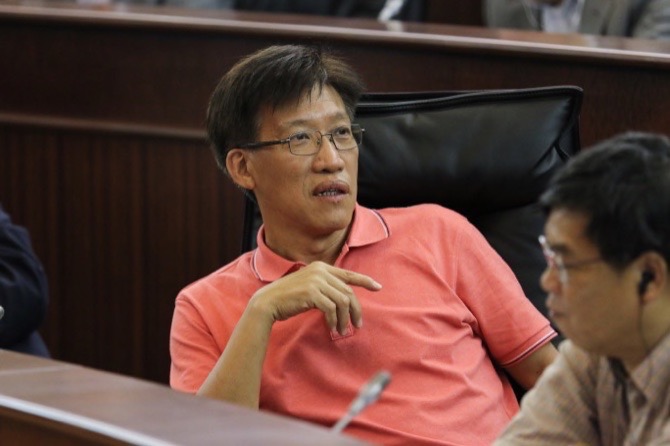 Lawmaker Au Kam San wants the gaming concessionaires to be partners in the Macau Light Rail Transit (LRT) project, which will open to the public this year.
The idea came in the form of a proposal to the government in the period before the agenda began at the Legislative Assembly (AL) yesterday afternoon.

According to Au, the operation of the LRT should highlight its commercial aspect and the gaming companies should be given the opportunity to be shareholders of the company that will operate the transportation system.
The LRT Company is wholly-owned by the government, which directly holds 96% of the shares, with the remainder being distributed by two governmental funds – the Industrial and Commercial Development Fund with 3% and the Science and Technology Development Fund with 1%.
According to Au, this division between the three governmental entities is a tactic employed the government purely to comply with the law – which requires three partners – a system Au regards as unnecessary.

In fact, Au supports a more commercial side to the operations by involving the gaming concessionaires, which he said could be some of the bigger beneficiaries of the project.

The lawmaker thinks the government should have a more open and commercial approach to the management of the company, which would allow private investors to be involved. He said this would help to save public money.

Au noted that now is the right time to approach the gaming concessionaires “to invite them to invest in the LRT” since the “gaming concessions contracts are about to expire.”

Au referred back to the period before the gaming liberalization, recalling how Stanley Ho’s Sociedade de Turismo e Diversões de Macau (STDM) “invested heavily in public companies such as the Macau International Airport Company, Teledifusão de Macau [TDM] and Companhia de Electricidade de Macau [CEM].” He remarked that in this new era of added competitiveness in the market, there are better conditions for this kind of participation to take place.

Au also remarked that at a time when society has been arguing about whether gaming companies should assume a more relevant role in terms of social responsibility – “to which they have never objected” – he noted his belief that this is an opportunity for them to do so.

He added that the LRT operating company can benefit from the “excellent commercial teams” that the gambling operators possess, giving opportunities to improve the operation of the LRT so that it does not become a “giant white elephant.”

The proposal from Au came on the day that the plenary finally approved the LRT Transportation System Law without many remarks from the lawmakers.

Nevertheless, remarks were made on the interlinking with other public transportation systems as well as in relation to fares for the LRT.

After the approval, lawmaker Zheng Anting, speaking also in the name of Mak Soi Kun, delivered a vote declaration in which, although expressing agreement with the LRT and the law, said he had some reservations.

“Society is concerned with this service and with the fares,” he said. “The government replied that such fares will be settled by dispatch by the Chief Executive but [he] never noted to be willing to hear the population on this matter.”

Zheng said he hoped that the fares will be set at a reasonable level and in line with other transportation options in the SAR.

The lawmaker also alerted the government about the need to train specialized employees locally so the service would not be completely dependent on imported labor.

Angela Leong noted that the government had said that with the entry into force of the LRT service, some bus routes and services would be subjected to changes, although there has been no clarification on what those changes will be. Leong specifically questioned the interlinking between the service and buses in Macau.