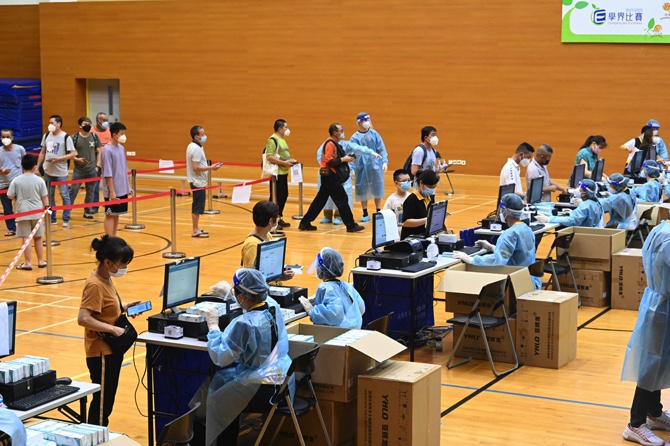 A line should be drawn to equalize the compensation for civil servants who worked during the June 18 Covid-19 outbreak, lawmaker Ron Lam has advocated in his recent written enquiry.

The June 18 outbreak halted the city’s activities for about 45 days, of which 10 were under almost complete lockdown. Despite all non-essential activities being suspended, some civil servants were asked to assist in disease management and support.

Lam pointed out that different bureaus or government entities have different views on the provision stated in Clause 1, Article 199 of the Macau General Regulations Governing Members of Public Administration Positions.

It is stated in the provision: “Under the circumstances that a general waiver of work is given to all workers in a governmental department due to exemption from work, orders from the Chief Executive on closure of department, or natural disasters or severe weather conditions, workers who work due to vocational necessity are compensated by deduction from normal working hours. The number of hours to be deducted being equal to the number of hours of work performed, but not exceeding the worker’s normal daily working hours.”

The difference in the interpretation of the said provision has, Lam said, resulted in the difference in arrangements in choosing between a working hours waiver or overtime compensation. He thus questioned the Public Administration and Civil Service Bureau (SAFP) as to whether it would clarify the manner in which this matter should be handled.

On the other hand, some civil servants have been offered the option of conducting a working hours waiver, but were abruptly asked to work extra hours to compensate for the waived working hours.

Lam was told by complainants that the confusing arrangements had made a severe negative impact on morale. Therefore, he asked the SAFP if it would proactively contact all governmental departments to ensure that all of them made legal and fair arrangements with respect to the matter.

He also pointed out that governmental chiefs have differing interpretations on “general waiver of work” as in the law. Hence, he asked the SAFP if it would give a clear definition of this, adding that the lawmaking record at the parliament has no mention of it.

Similar to the multitude of occasions on which lawmakers discussed topics and happenings related to the June 18 outbreak, the lawmaker did not forget to express his “sincere gratitude to the diligent, obliging and resilient civil servants who offered their services during the outbreak.”