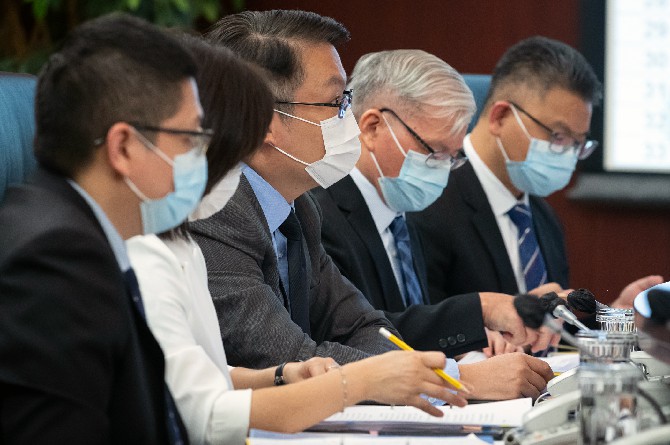 A group of lawmakers grilled the Secretary for Economy and Finance, Lei Wai Nong, with questions and concerns regarding the lack of regulations and rule enforcement to guarantee that local residents continue to get priority access to jobs, and to the payment of their salaries.
The topic was the highlight of yesterday’s plenary session at the Legislative Assembly (AL) where Lei met lawmakers’ inquiries.
From the start, lawmaker Ella Lei kicked off the inquiry by calling for the installment of a compensation regime for the suspended workers. She did so given the recent spate of many known cases of workers laid off, or in precarious circumstances with reduced or suspended income.
In reply, the Secretary echoed his previous responses to questions from lawmakers on the matter. He restated the difference between unpaid leave and situations in which salaries are reduced or even unpaid.
As stated on previous occasions, Lei remarked that unpaid leave and layoffs are dependent on mutual agreements between employers and their employees, hinting that the government cannot interfere with such arrangements and agreements without breaching labor law provisions.
According to the Secretary, this year the Labour Affairs Bureau (DSAL) has only recorded 427 cases of labor conflict between employers and their employees, involving a total of 686 people.
These numbers were very different from those that lawmakers, namely Ella Lei and Leong Sun Iok, presented. They noted tens-of-thousands of employees that see their survival and of their families threatened. These employees claim to have not received salaries for “many months, or even over one year,” according to Lei.
Lawmaker Lei called for the amendment of current laws, and for the establishment of an emergency fund mechanism that would allow workers to see their salaries (totally or partially) secured when employers do not fulfill such duty.
Without stating clearly whether or not the government intends to promote any changes to the current system and rules, Secretary Lei noted only that the government will continue to review and adjust the laws and regulations when necessary, taking into account public opinion.
Lawmaker Leong was not happy with the response, noting that it is necessary and urgent to review said mechanism. Leong asserted that employers can abuse the existing mechanism in retaliation to attempts to report employer wrongdoings. He also highlighted the fact that “the costs involved in a lawsuit to retrieve unpaid wages are too high for the workers already [struggling].” He called on the government to revise the whole regime.
Leong noted that although the rules clearly state that layoff situations require agreement between both parties, and claimed “we know very well that in many cases the workers were forced to accept that decision from the employer.” He added: “until this moment, we have [had] no mechanism that can safeguard the rights of the workers.”
Adding to the debate was lawmaker Sulu Sou, who recalled previous statements from the Chief Executive (CE) Ho Iat Seng acknowledging that the government does not have data on the layoff situation in Macau.
“This fact alone already reveals that the juridical regime has flaws and needs to be perfected,” Sou said, going on to advance a solution.
“We do not need to change the Labor Law – what we need to do is perform a better reading of the labor law. DSAL says only wage reductions need to be communicated. The layoff situation [ultimately] is also a situation that causes a wage reduction.” Sou explained that said the DSAL notes on their official website that layoffs are strongly recommended to be contained to a period no more of one month. However, this is not what the reality shows.
“This [one month] is just a suggestion by the DSAL, because the labor law does not state anything on that matter. What happens if the employer requests the worker to be on layoff for over six months – can he resign with a just cause? I don’t think so.” remarked Sou. He stressed that it is useless and unproductive for the government to continue asserting that an agreement between workers and employers is needed.
On the topic, lawmaker Au Kam San recalled that there was previously a layoff regime that came from a period in which Macau’s economy was mostly supported by the manufacturing industry. This regime was then revoked when the AL started to discuss a minimum wage regime, as a layoff scheme was now considered unnecessary.
“I think we are now clearly seeing that the old regime [of the compensation of worker layoffs] had its value,” Au said, adding, “It is needed to legislate again to guarantee the interests of the population.”
Trying to balance the debate were lawmakers Ip Sio Kai and Mak Soi Kun, who opposed the idea that added guarantees should be granted to the workers.
The lawmakers expressed that negotiation with the employers is also necessary, as the previous lawmakers were trying to push the responsibilities onto the employers.
“We need to see if these companies and employers have the capacity to do this. I know in many cases the employers opt for layoffs because they are also in a poor situation and have no other way out. We need to have a balance here,” Mak said.

Trade Union law
is the solution
During the debate over the lack of guarantees from laws and their enforcement, lawmaker Ng Kuok Cheong intervened to point out the optimum solution to all the problems and difficulties previously discussed by the lawmakers.
Ng said the solution was in the Trade Union Law, which several lawmakers have been trying to establish in Macau for many years.
“The government says it is going to revise [the law] but never says when, and also already clearly stated several times that they have no figures on the problem. When it was here [at the AL] the last time, the CE even asked the Workers’ Association [Macau Federation of Trade Unions] to hand the figures [of workers in layoff] to the government,” said the lawmaker.
“We are forgetting that this is the reason that we have been calling for decades for the establishment of the trade union law. But there isn’t one and the government wants now for the associations to act like if there is?” Ng asked rhetorically.
“The figures [on layoffs] are not to sanction the employers, but to be able to understand the reality and to draft policies according to it,” Ng concluded.