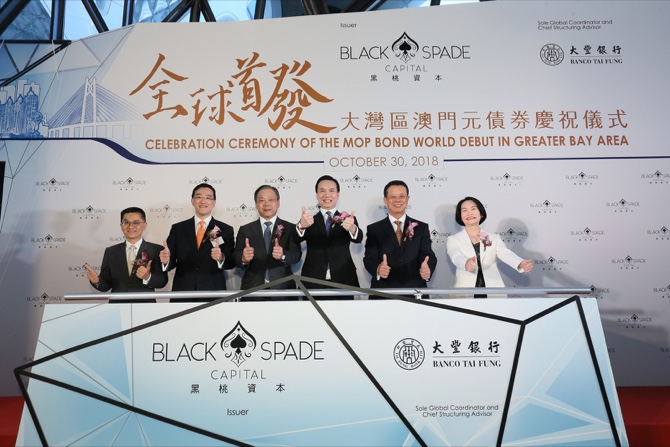 The family office of Lawrence Ho, Black Spade Capital Limited (Black Spade Capital), has officially announced the MOP bond world debut of its new initiative in the Greater Bay Area with a celebration ceremony held at the Morpheus Hotel.

This bond is valued at two billion MOP and has a maturity rate of two years, with a coupon rate of 3.1 percent.

This is also the first MOP-
denominated corporate bond in the Greater Bay Area, as well as globally.

Through the issue of the world first’s MOP bond in the area, Black Spade Capital hopes to provide investors and banks with more diversified investment opportunities that can offer promising returns.

The first MOP bond is expected to inject fresh vitality into the Macau economy and further enhance its financial competitiveness.

“We see the market, we see the niche. […] If you have MOP on hand, what you will do is just to deposit it in the bank. […] We provide another solution to give the people and investors a higher yield than that [deposit rate]. Right now, the current deposit rate is 1.4 percent per annum, in Macau. If you are a very high-end private banking customer, what you can get is around two percent. So our bond issued at 3.1 percent is very attractive,” said Dennis Tam.

According to Tam, Black Spade Capital had the idea of issuing the MOP bond back in August this year, with the company initiating actual work on the project in the first week of October.

Tam deems the issuing of this MOP bond as “very successful”.

Regarding the areas of investment where the bond will be involved, Tam said, “We have some plans already. We have some general ideas on hand already.” He further noted that the bond is currently aimed at “general investment.”

“I foresee that since we are doing the first one here, I believe that there will be a lot of followers. They will use MOP to tap into the market,” Tam added.