LETTER TO THE EDITOR | Open letter to Fr. Stilwell and Fr. Tolentino Mendonça 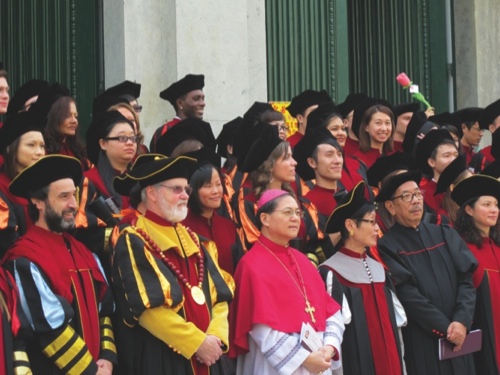 I was delighted to hear during an interview given by Fr. Stilwell and Fr. Mendonça to TDM-Radio today [yesterday], in Portuguese, that from now on they would decline to comment any further on my case. I believe that this is both wise and welcome, especially after all the bad publicity brought about by the open admission that my sacking from USJ had been triggered by political motives, something that is clearly in breach of article 6 of the Labor Law of Macao. Unfortunately, the sagacity of this decision not to make things worse comes about a tad late, especially because Fr. Mendonça made several additional comments last Thursday and Friday in regards to my termination of contract. I had already given up on charitable thoughts coming from that institution when my academic life was derailed at the worst time for me to find a new position—that was 3 months ago, but I did not expect deception and half-veiled slander to openly surface with the visit of Catolica’s envoy.
Let me recap briefly what Fr. Mendonça said, especially in the comments he made to Ponto Final on September 26 under the title “Vice-reitor da Católica diz que afastamento de Eric Sautedé foi ditado por percurso académico.” First, Fr. Mendonça insisted that the Catholic University of Portugal was, through him, in full solidarity with the decision taken by Fr. Stilwell to terminate my contract, and this was for two reasons: 1. Because of my “academic cursus”-credentials, not having finalised my doctorate; and 2. Because he did not disagree with the idea that commenting or researching on local politics was not proper, and could actually be a reason for dismissal if it did put the university in a “delicate situation”. Ultimately, Fr. Mendonça reiterated that all this was “in line with the values and requirements” of the Catholic University of Portugal.
As far as the doctorate is concerned, I am quite disturbed. First, because if that was a requirement to teach in university—which is not by law in Macao—more than half of my former faculty colleagues would have to be sacked, and this does not only apply to USJ. Moreover, a former diplomat who has served some time in Macao right after the handover has just been hired by USJ whereas he only holds a Bachelor’s… As far as my own credentials are concerned, I hold, on top of my Bachelor’s in history from the Sorbonne, a diploma and a MA in political science (in fact slightly higher, it is called a DEA in France, obtained in 1993) from the best institution there is in my home country, Sciences Po Paris, a school from which many politicians and academics alike have graduated from and that is tightly connected to the LSE in the UK and Columbia in the US. I have furthermore been enrolled in a PhD at the EHESS in Paris since 2010, under the supervision of renowned sinologist Prof. Michel Bonnin, and 2014/2015 corresponds to my last year before defending my thesis. I have lived in this part of the world for 20 years, published dozens of articles, including in SSCI journals, edited books, published book chapters in my area of studies (Politics in Asia and Internet in Asia) and I sit on the board of three international academic journals. I was also the editor for many years of the main academic French bilingual journal on contemporary China and started (and then directed) an English-Chinese journal of intellectual dialogue for a pretty famous Jesuit institution based in Macao. As far as teaching is concerned, and when USJ still had a working mechanism of teaching evaluation, I always had very good reviews from the students. Moreover, the recent mobilisation and declarations made by quite a significant number of students speak for themselves. So, I am asking Fr. Mendonça : what makes a “good” scholar and tertiary educator in his view? Isn’t the relevance and depth of academic insights shared openly in academic publications one of the main criteria? What about teaching capabilities then? And the duty to accommodate a diversity of view points and perspectives?
As to the justification of political self-censorship and that this represents the “values and requirements” of the Catholic University of Portugal, I was under the impression when I was invited to give a talk at Catolica Porto over the summer and later on met with someone from the Catolica Lisbon in Coimbra that this was not exactly a unanimously shared sentiment. Obviously, in Portugal, democracy and social justice do not contradict the social doctrine of the church—both of them universal. In Coimbra, Prof. Ming K. Chan publicly characterised what was happening to me as a “new inquisition”. I of course disagree with that perspective, although my consideration for the head of the Macao diocese has somehow been altered by this whole upheaval, but I sincerely believe that there is some kind of twisted form of supposedly long gone “lusotropicalism” at work here. Fortunately, it only seems to affect the weakest and darkest minds. I did not expect either Fr. Stilwell or Fr. Mendonça to be among them.