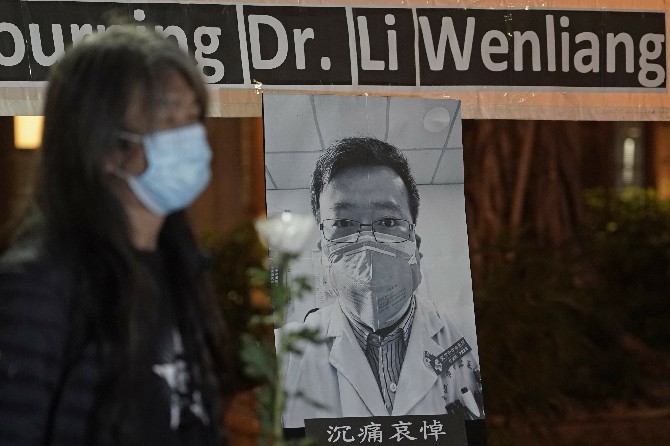 China’s top disciplinary body has criticized how police handled the case of a Chinese doctor who was reprimanded for rumor-mongering after he shared a warning with others about the coronavirus in the early days of the outbreak.
Dr. Li Wenliang later died from the virus, sparking a national outpouring of grief and criticism of authorities on social media.
Chinese media reports late yesterday said an investigation by the State Supervision Commission, China’s top disciplinary body, found that the reprimand was inappropriate. It urged the police to revoke the reprimand and hold those involved accountable.
Li, an eye doctor, was one of several medical workers detained in early January for spreading word about the then-unknown disease. Authorities have been accused of covering up the initial outbreak, endangering heath workers and allowing it to spread more widely.
According to state news agency Xinhua, the report says that in December last year several hospitals in Wuhan received a certain number of patients with pneumonia of unknown cause.
On Dec. 30, the Wuhan Municipal Health Commission issued internal documents ordering efforts to treat patients with pneumonia of unknown cause.
On the same day, soon after receiving information forwarded to Li by a colleague, the former posted in one of his WeChat chat groups text messages including “seven SARS cases were confirmed at Huanan fruits and seafood market”, a photo and a video clip.
Li later sent more messages to the chat group: “According to the latest information, it is confirmed to be coronavirus infection. The type of the virus is being determined.” “… Please alert your families to take precautions.”
The messages, along with other similar information, led to public attention and discussions.
The report cited by Xinhua, went on saying that on Jan. 3, 2020, a local police station of the Wuhan Public Security Bureau summoned Li for a talk in line with the spirit of Wuhan’s arrangements on preventing and controlling the epidemic of pneumonia of unknown cause.
During the talk, Li said it was wrong to send the SARS-related messages in a WeChat group.
A letter of police reprimand was issued to Li.
On Jan. 10, 2020, Li developed a fever. He was hospitalized on Jan. 12 at the ophthalmology ward of the Central Hospital of Wuhan before being transferred to the No. 3 ward zone of the hospital’s respiratory and critical care department two days later. Li was transferred to the intensive care unit of the respiratory and critical care department on Jan. 23 and died on Feb. 7.
Li’s attending doctors said the treatment for him was procedure-based and timely and the medics did their best.
According to Xinhua, Wuhan Municipal Human Resources and Social Security Bureau has identified Li as a case of occupational injuriy, for which a workplace death subsidy and a funeral subsidy have been paid in accordance with regulations. Li’s family has also received payment from a donated insurance scheme.
The investigators have suggested that local supervisory authorities look into the issuance of the reprimand letter to Li, which “was inappropriate and failed to respect relevant law enforcement procedures, and urge police to revoke the letter and hold those responsible accountable and release the results in a timely manner.”
In death, Li Wenliang became the face of simmering anger at the party’s controls over information and complaints that officials lie about or hide disease outbreaks, chemical spills, dangerous consumer products or financial frauds. MDT/Agencies