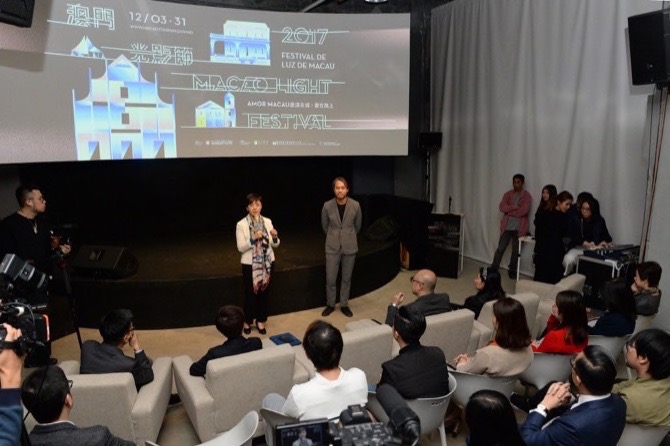 The “Macao Light Festival 2017 – Amor Macau” will be on stage from December 3 until 31 at various locations across the city, with a reduced budget this year of around MOP18 million. This year, the festival will be organized at eight locations including the Ruins of St. Paul and St. Anthony’s Church.

The festival is said to provide a journey which is designed and created by over a hundred local transmedia creators and is organized by the Macau Government Tourism Office (MGTO).

In its third edition, the Macao Light Festival will present a program which includes protection mapping, light installations, interactive games and a series of other activities such as the Light Art Exhibition, Mini Concert, Outdoor Movie and Light Dinner.

Related cultural and creative products will be launched in tandem with the festival.

During the light festival, the city will also be enlivened by a string of events including the second International Film Festival & Awards, and the Macau Shopping Festival and the Macao International Parade, as well as celebrations for the 18th Anniversary of the Establishment of the Macau SAR.

According to the MGTO director, the lighting shows will only be on display from 7 p.m. to 10 p.m., to ensure life in neighborhoods does not get disturbed into the late hours.

The event will feature an array of light installations and games. Anim’Arte Nam Van will be transformed into the Playground of Lights.

“We have something new compared to previous years, […] the satisfaction of visitors of both local residents and non-
local tourists increased [in the second festival],” said Helena de Senna Fernandes. She added that 90 percent of the interviewees support the Macau government’s efforts in continuing to organize this festival.

“Based on the two previous years and on the festival’s new elements for this year, I believe that human traffic will increase. I hope it can increase by at least 50 percent,” anticipated Fernandes.

It was reported that over 200,000 visitors have visited the Macao Light Festival.

Last year, the government dimmed the lighting in response, however, received criticism this time that the festival had been over-dimmed.

Regarding this year’s lighting, Helena de Senna Fernandes said, “We will balance it. We can all perceive that the selected architectures this year have bigger areas, therefore requiring bigger lighting areas. I believe that the experience this year will be more astonishing than in previous editions.”

She noted that the lighting this year will be slightly stronger than last time.

The designers have also arranged between 150 to 160 volunteers to assist at the festival.

When asked whether the festival helped to increase local businesses, Helena de Senna Fernandes admitted that “we did not collect data regarding the exact number of businesses which saw an increase in their revenue.”

However, the MGTO director noted that she indeed remembered some shops at Taipa saying that they registered more sales during the light festival, particularly during the festival held on Valentine’s Day.

“Even though we do not have meticulous data, we do hope that more people can learn about the Freguesia de São Lázaro district,” said Helena de Senna Fernandes. In addition, she hoped that more attention could be drawn to the local recreational industry through this festival.