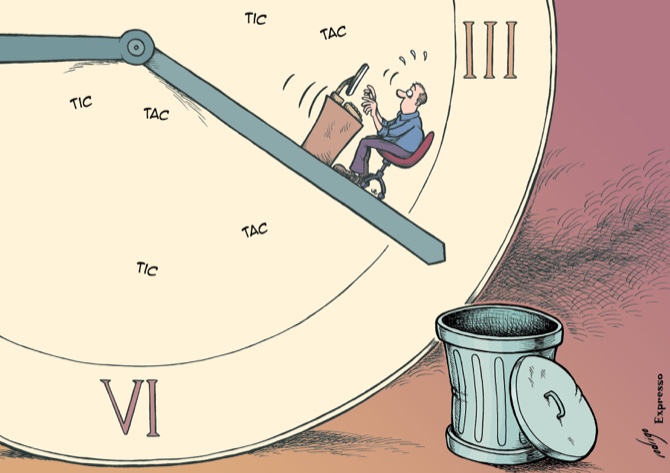 A local cartoonist’s work was selected by United Nations to be included in Monday’s 70th anniversary celebration of the signing of the Universal Declaration of Human Rights. Thirty cartoons were chosen for the project – one for each article of the U.N. document.

Rodrigo de Matos’s cartoon, “Desemprego Pontual” (Punctual Unemployment), reflects on employment stability in the modern age. It accompanied Article 22 of the Declaration, which begins, “Everyone, as a member of society, has the right to social security.”

“Desemprego Pontual” depicts a man and his work desk precariously balanced on a clock hand that forms a steeper decline as the minute hand ticks onwards, threatening to send the man hurtling into a trashcan below.

The cartoon was published in Portuguese weekly newspaper Expresso in 2011, the year that Portugal accepted a bail- out from the European Union and the International Monetary Fund to help the country recover from its financial crisis.

Portugal was one of four European countries hit particularly hard during the 2007 financial crisis, taking years to recover and seeing the unemployment rate soar to 17.5 percent in early 2013.

“The cartoon is about some news related to temporary work in Portugal at the time, the type of volatile link between employers and employees. It criticizes that trend,” Matos told the Times in a phone interview. “I suppose it still goes on these days. The problem has not been solved, but rather aggravated.”

For Matos, the U.N. project to combine cartoons with the articles of the Universal Declaration of Human Rights was “a smart move,” as the art form is able to effectively communicate with different cultures and languages.

“I think the use of cartoons is a smart move as it is a language that is universal. Without words, cartoons have the ability to show lots of different ideas in a single image,” he said.

“I wish more institutions would do these sorts of projects [involving cartoons],” he said, adding that the art form was “not as explored as it should be.”

The 30 cartoons selected were nominated from hundreds of submissions, and then voted on by the participating cartoonists. The winning pieces are to be exhibited in Geneva, The Hague, Dakar and São Paulo, simultaneously.

In addition to working with Expresso, Matos has also worked as a cartoonist for local media outlets Macau Daily Times and Ponto Final. DB