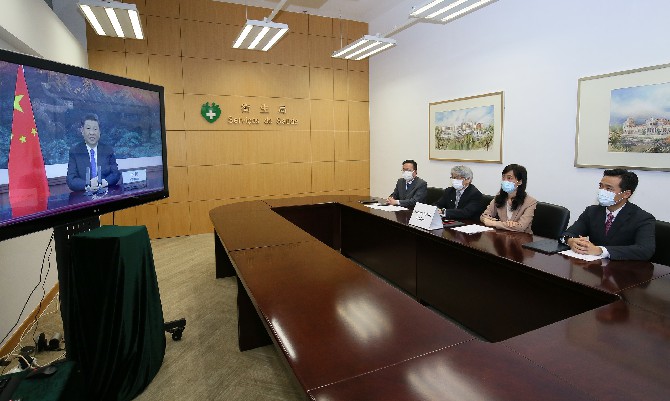 Macau’s Secretary for Social Affairs and Culture Ao Ieong U said that health officials and other government staff gained new insight from the opening session of the World Health Organization’s (WHO) 73rd World Health Assembly on ways to enhance the territory’s response to the Covid-19 pandemic.
Four local officials attended the opening session via videoconference late Monday evening. This included Secretary Ao Ieong; the Director of Health Services, Dr Lei Chin Ion; the Adviser to the Office of the Secretary for Social Affairs and Culture, Dr Lo Iek Long; and the Chief of the Center for Disease Prevention and Control, Dr Lam Chong.
During the opening ceremony, Chinese President Xi Jinping delivered an address detailing China’s proposal regarding a number of measures to support the global fight against Covid-19. He said that China would provide $2 billion over two years to fight the pandemic and the economic fallout.
His speech came shortly before the European Union’s 27-member bloc and other countries called for an independent investigation into China’s handling of the pandemic.
In his address, Xi said that China insists on always maintaining an open, transparent and responsible attitude. The Chinese president said that the country had acted responsibly for the safety and health of its people, as well as in the interests of global public health.
According to a summary statement issued by the Macau government, Xi called on all countries to “come together to build a human health community.”
The World Health Assembly is the highest level decision-making body of the WHO. Its main functions are to determine WHO policies, appoint the Director-General, supervise financial policies, as well as review and approve planning and budget plans.
The assembly, which is being held in Geneva, Switzerland, was gathered to analyze the working report of the WHO Director-General, the WHO Budget, the anti-epidemic work of WHO member states, and international cooperation, among other topics. Due to the Covid-19 pandemic, consideration of many of these matters has been deferred. The 194 WHO member state representatives discussed several matters this week by videoconference. DB