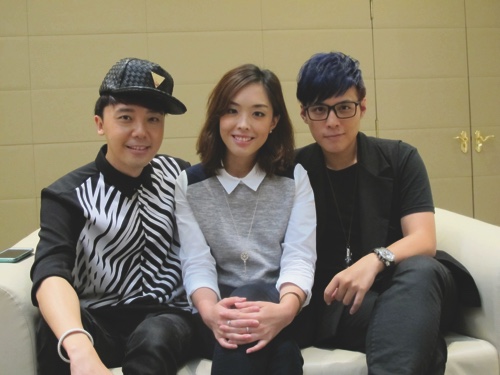 No matter what profession you’re in, life is like an arena where we should persist till the end,” said local singer Josie Ho when introducing a new inspirational song written and produced by local musicians in Macau.
Titled “Get Ready,” the original song features a determined boxer who throws away all distractions and fears to face a tough bout in the arena. Accordingly, local boxer “The Macau Kid” KK Ng and his fellow boxing enthusiasts star in the song’s music video.
“It’s an inspirational, upbeat song that uses boxing as its theme and will be performed live when KK marches into the Cotai Arena on November 23’s boxing event. But it’s not simply a theme song for KK, instead, we want to encourage young people no matter what they do,” introduced Josie along with her two peers, Hyper Lo and AJ.
“We ourselves might not know how far our limits are, but in fact everyone’s got great potential. Therefore we should believe in ourselves and move forward,” explained the song’s lyricist AJ.
“Many people have said negative things to us and some musicians have given up. At present, there are about a dozen Macau singers who still remain committed to doing music,” added full-time musician Hyper Lo.
“Difficult or not, it depends a great deal on where your interests lie; when you have great interest in something, these [restrictions] will no longer be big problems for you,” he stressed.
Except for Hyper, the other two singers perform in their spare time while working full-time at Sands China. They explained that the song’s theme was a consequence of the company hosting a number of boxing events.
“We thought that the theme of boxing could be a good inspirational concept,” she said, adding that the entire production of the song was sponsored by Sands China. “The MV was filmed by our [Sands’] in-house crew; everyone has been very busy these days, but they still showed us great support.”
The song’s composer Hyper told the media that there hasn’t been a gaming corporate in Macau that had sponsored local music before; moreover, there hasn’t been a local MV production that has been on “such a large scale with the number of participants reaching nearly a hundred.”
“This is a great encouragement for us. Besides, the sponsor set no limits in our song writing and composing; it’s 100 percent our creation,” he stressed. “Maybe later other gaming corporates will start sponsoring local musicians too. That’s what we’d like to see happening.” BY