Look out! SOHO is coming to town 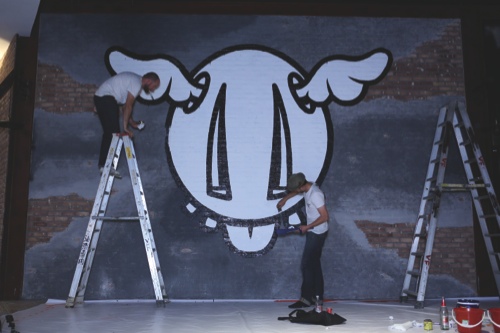 One crucial element that defines a sophisticated metropolis is the dining and entertainment experience it offers to residents and visitors. Macau, once a small city in South China, is now set to join the ranks of London, New York, Shanghai and Hong Kong to become “one of the most attractive entertainment capitals in the world” following the opening of the SOHO Macau at City of Dreams.
Dedicated to providing a world-class gaming, entertainment and other non-gaming amenities to its guests, City of Dreams says it “seeks to revolutionize Macau’s dining and nightlife” with SOHO Macau’s mix of global cuisines and sophisticated bars.
With 16 restaurants and bars, as well as daily live performances, “SOHO will certainly become the leading social hub in the city where everybody can chill out with old friends and connect with new ones.”
But its attractions do not end there. To further transform SOHO Macau into a district with the same artistic, effervescent and creative spirit like its counterparts throughout the world, City of Dreams has brought in one of the most renowned urban contemporary artists in the world – D*Face – to give the place an extra touch of hip and chic with his Soho-inspired art mural.
D*Face believes that all Soho districts around the world are associated with creativity and alternative thinking. However, he feels it strange that Asian cities do not have much public art on display in their streets.
“You are lacking in public arts. It is actually very strange for a city that has got so much space that could be painted. But there is no public arts.”
The artist says that all it would take is a few large-scale murals for people to start appreciating the arts in the public space.
That’s why, as a fashion beacon in Macau, SOHO Macau is on a mission to rid the city of dullness and bring it into line with other cosmopolitan spaces in the world through the art piece of D*Face.
When it comes to his artwork, D*Face said that he usually allows people to interpret them. “But a lot of them are about romance, past and present, the dynamics between two people – male and female… a current relationship or a situation that has passed, some memory of somebody. It’s generally about that.”
As the artist says, “the dynamic” between people, is very important for Soho. Indeed, what is so special about SOHO Macau “is that it is not just a place full of restaurants and bars that provide excellent quality of food and beverage, the district in City of Dreams is also a meeting point for people who appreciate the hip and chic lifestyle that it represents.”
It is not just the physical enjoyment that people will get there; it is also the interplay between people that will draw them to SOHO Macau.
When you come to see D*Face’s creation, you will find that it depicts a couple where the guy has a green face while the woman has a more realistic skin color and pink lips.
“It represents a memory of past or present as opposed to being physically representative of a skin tone. It’s more like her memory of him… It’s normally about the feeling of somebody, whether that’s a past relationship… So it doesn’t refer to any particular ethnicity,” D*Face explained.
The same goes for the people who spend time in City of Dreams’ SOHO. The district not only attracts customers from a particular community but rather, people with different ethnic or cultural backgrounds will be drawn there by the glamorous lifestyle.
As such, in SOHO Macau, people will be able to make new connections with all types of individuals who have their own unique mindsets and experiences to share. “If you are looking for somewhere to build a rich social network, SOHO Macau will be the place to go.”
In fact, SOHO is not only decorated with D*Face’s art piece. There are also other artistic installations that will bring joy to visitors.
One of them is a 3D screen that is put between the murals of D*Face. People can expect to see images played to fascinating visual effect.
There is also a screen that adopts the split-flap mechanism like the old style information board in airports, but in a much more high-tech and sophisticated way. People will be able to see their own images (or rather the shape of their bodies) displayed.
All these intriguing art pieces and installations contribute to making SOHO Macau an exciting place for people from all walks of life to gather and enjoy their time among the artistic creations.
D*Face said Macau should “look out for” his creation, just as people should look out for SOHO because of the “amazing cosmopolitan experience it brings to the city.”