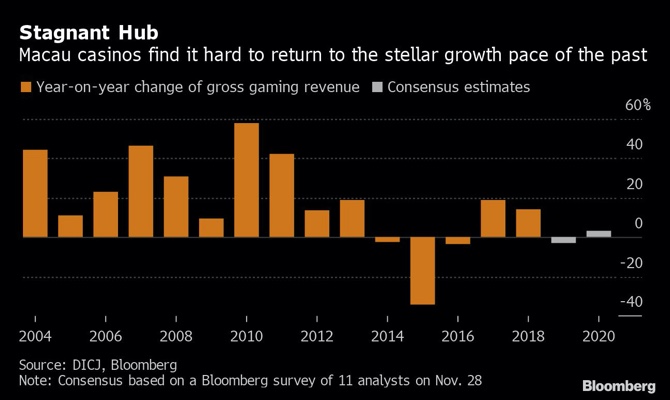 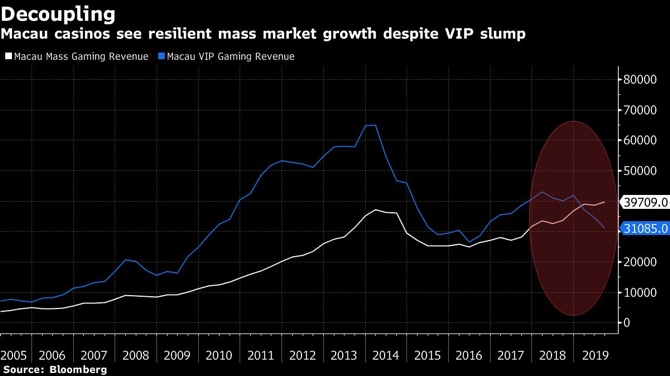 Two decades after Macau returned to Chinese rule, a shift that catalyzed its emergence as the world’s biggest gambling hub, casinos are facing serious obstacles to their future growth. Macau casinos are poised for the first decline in annual gaming revenue since 2016, and next year may not be much better either, reports Bloomberg. Indeed, the enclave will find it difficult to return to the double-digit growth pace of the past.

“All of the juice has been squeezed out of the orange,” said David Bonnet, a contributing analyst at Bloomberg Intelligence. “Macau is starting to resemble more mature competitive markets such as Las Vegas and Atlantic City.”

Analysts surveyed by Bloomberg forecast on average that Macau’s gaming revenue will swing from 14% growth in 2018 to a decline of 3% in 2019. They predict a mild improvement of 3% in 2020 on easy comparisons with this year’s low levels.

A Bloomberg Intelligence index of Macau casino operators has dropped 20% from a peak in late April. It fell as much as 0.9% yesterday.

The industry went into 2019 expecting a difficult year as the U.S.-China trade spat weighed on China’s economy. Although hopes were raised in April for a second-half recovery, the rest of the year presented one setback after another, including the violent protests in Hong Kong that have slowed a record number of tourists to Macau.

One of the biggest blows was the absence of high rollers, or VIP gamblers. Macau, the only place in China where casinos are legal, has made its money for decades on a few thousand rich gamblers. That group is now increasingly more likely to place their bets in emerging regional gaming hubs in Southeast Asia, as junket operators – middle men who extend credit to wealthy gamblers – shift to those territories.

The biggest, Suncity Group Holdings Ltd., is set to open a Vietnam resort in the first quarter, the launch of which “could result in the redirection of a material chunk of VIP play from Macau,” said Union Gaming analyst Grant Govertsen.

The resorts in regional hubs “will be stunning,” adds Ben Lee, a Macau-based managing partner at Asian gaming consultancy IGamiX, after a recent site visit to view ongoing construction.

One of the biggest threats may come from Japan, which is likely to emerge as Asia’s second-largest gaming hub after a landmark bill legalizing casinos was approved last year. All six Macau operators have expressed interest in setting up a resort in Japan, which has the potential to see gross gaming revenue reach $20 billion annually, brokerage CLSA predicts.

For now, Macau operators are hopeful for a resolution to the trade war, which Melco Resorts & Entertainment Ltd. Chief Executive Officer Lawrence Ho cited as having the biggest impact on casinos this year.

“If there’s a first-stage trade deal, that will boost consumer confidence in China, and that gives me hope certainly for 2020,” said Ho on Bloomberg TV last week.

Longer term, casinos such as Melco see their – and Macau’s – salvation in the record number of tourists flocking to Macau, even with the disruptions in Hong Kong. Revenue from the so-called mass market surpassed that from the VIP sector this year for the first time.

Casinos are racing to build bigger and flashier resorts to offer more entertainment options. Not only will that help replace weaker VIP revenue, it will also keep the casinos aligned with Macau’s guidelines for providing more family-friendly attractions.

Las Vegas Sands is building more rooms designed for tourists as part of its renovation and rebranding of the Londoner resort. Wynn Resorts recently unveiled a $2.8 billion plan to develop a non-gaming project in Macau, including a theater, art gallery, food pavilion and gardens.

At the same time, infrastructure upgrades will make transport easier for casual gamblers without shiny limousines. A Macau light rail that connects to resorts in the Cotai strip and to a mainland crossing will started operating yesterday.

“The investment proposition in Macau, going back to the beginning, was always one billion or so people at your doorstep,” he said in a conference call in October. “We’ve always believed that the engine here would be, and should be, all those people across the border.” MDT/Bloomberg