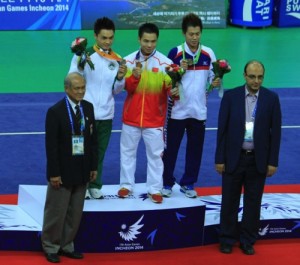 Huang Junhua from the Wushu (martial arts) team of Macau won a silver medal yesterday at the Asian Games, currently taking place in Incheon.  This is the third medal for Macau at this year’s games. The athlete was competing in the Nanquan/Nangun sub-category. He scored 9.64 in Nangun, ranking third. In Nanquan, he was able to get 9.66, 0.01 point higher than his Vietnamese opponent and 0.11 lower than the athlete from the mainland. He secured second place after combining the two results and lost to China’s Wang Di.
Meanwhile, Macau swimmer Hgou Pok Man, who broke the Macau 100 meters backstroke record on Sunday, continued his stroke of victory, breaking the 50 meters Macau record yesterday in the group stage of the backstroke category. Unfortunately, he was again unable to make it to the next stage.