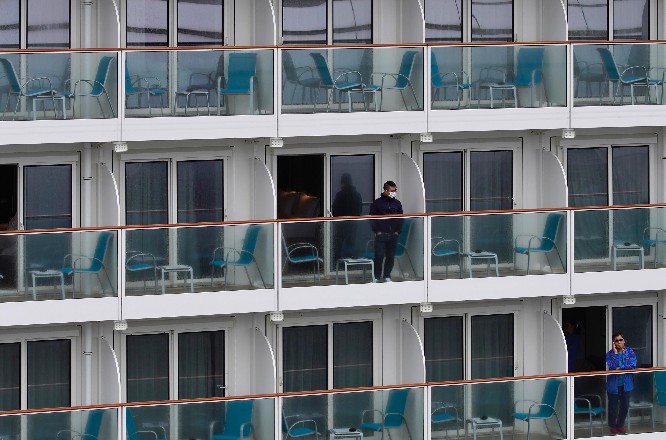 Two Macau SAR passport holders are on board a cruise ship that has been left stranded at a Japanese port in Yokohama, the Health Bureau (SSM) confirmed yesterday at the daily press briefing.
The concerned cruise ship is now floating on the sea off the coast from the Japanese city, waiting for further instruction by the Japanese authorities (more on p8).
A patient in Hong Kong confirmed to be infected with novel coronavirus had been on board the ship. Later on, the ship’s 3,000 crewmembers and passengers were tested for the virus. Ten of them have been infected, meaning the remaining passengers will need to be under medical observation.
According to Dr Lam Chong, director of the SSM’s Centre for Disease Control (CDC), the two passengers currently show no symptoms that may indicate an infection. The couple are now in Hong Kong under medical observation. One of them is aged around 60 and the other 70.
Neither the Health Bureau nor the Macao Government Tourism Office (MGTO), which also had a representative at the press briefing, explained further as to how assistance will be provided to the couple.
Nonetheless, the MGTO revealed that it has received an assistance request from a resident currently in the U.S. The resident had their United Airlines flight cancelled and could not return to Macau. The airline has decided to suspend all flights to Hong Kong until February 20.
The MGTO recommended that the couple seek assistance from other airlines. For the time being, Taiwan’s EVA Air is still running flights between Macau and the U.S., with a stopover in Taipei. AL