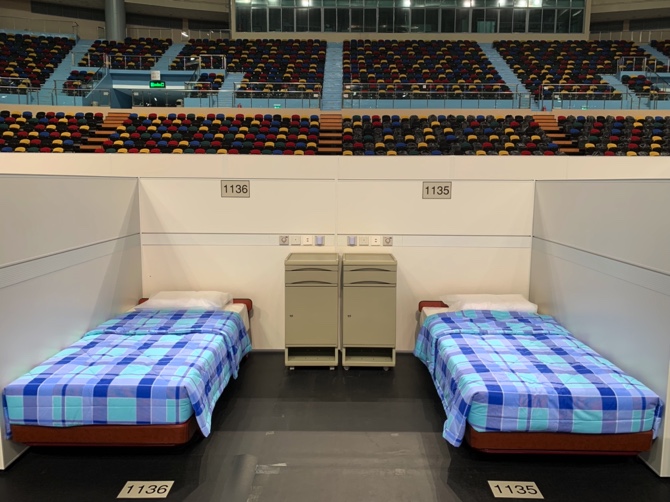 The temporary quarantine facility at the Macau East Asian Games Dome will replace the similar facility at the Taipa Maritime Terminal from 6 a.m. today, the local health chief said yesterday.

At the regular health press briefing pulmonologist Alvis Lo, director of the Health Bureau (SSM), announced that, due to an expected rise in the number of people requiring quarantine, the Taipa facility will reach capacity in the foreseeable future.

As the Macau Dome – now a makeshift hospital – is established, the bureau has decided that, from 6 a.m. today, the provisional quarantine station located at the Taipa terminal will suspend operations.

At the same time, the same facility located in Hall C of the Macau Dome will start operating. The new facility is spread across two floors, in contrast to the current venue which only has a single floor.

The decision was also made according to the mass outbreak contingency plan that was compiled and publicized by the government earlier this year.

The facility at the Taipa terminal has been in use so people arriving in Macau via the airport can be transported there to have their samples collected for a coronavirus nucleic acid tests (NAT), before being sent to appropriate quarantine facilities.

From June 18 to 3 p.m. yesterday, the city has detected 110 positive cases. According to the health chief, all cases were in stable clinical condition as of yesterday and no severe symptoms had developed.

The SSM has separated the 110 cases into five clusters. Fifty-five are connected to the Im Lai Building, 38 to the Tat Cheong Building, four to the Tim Fung Laundry Shop, three to the OD Health Club and two to the International Center in Porto Exterior. The remaining eight people are still having their epidemiologist conditions evaluated.

All but the fourth cluster are connected, Lo revealed.

A medical staff member at the public hospital’s special A&E service has tested positive. The person works as a secretion sample collector at the facility. For the time being, no symptoms are reported.

As of yesterday, no other staff members at the facility has tested positive. The SSM were still investigating the source of infection.

Due to the recent outbreak, the government announced yesterday that it has decided to change the criteria for identifying red and yellow zones, public health doctor and SSM official, Leong Iek Hou, revealed.

Leong added that those properties currently zoned as red will be converted to yellow if there is only a single positive case, in combination with negative NAT results from all people living in the building.

Health officials also said that they did not find any conclusive evidence of violations at two wedding banquets believed to have been attended by positive cases on or before June 18. The banquets were held at the Grand Lisboa Palace Resort and the Grand Hyatt hotel.

Claiming that it was not able to identify all guests who had attended the banquets, the government was, as of the time of the press conference, still calling for attendees to contact the SSM.