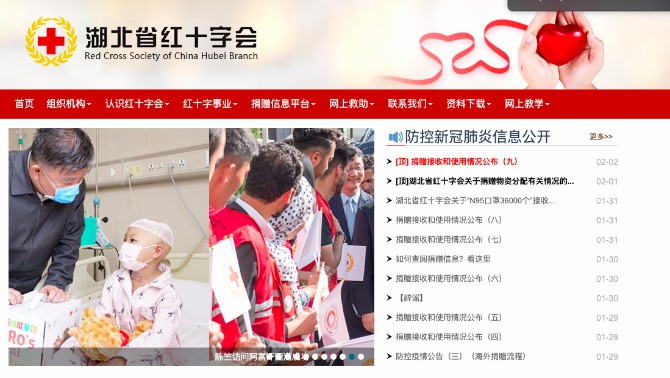 The website of the Red Cross Society of China Hubei

Local associations in Macau are donating hundreds of millions to Hubei province even after corruption within Hubei province’s government-owned Red Cross was exposed. It was found that the body diverted donations into the pockets of senior executives instead of using the money to help those in need.
Earlier this week, various organizations in Macau announced their donation plan to support mainland compatriots. Fukien Natives Generation Association of Macao issued a proposal to all Fujian-related associations in Macau to donate money and supplies to mainland China.
As of Tuesday, the association had received over 30.76 million patacas. On Tuesday, the association handed out 20.5 million and 10.2 million patacas to be transferred to the Hubei and Fujian local governments respectively.
State-owned Nam Kwong (Group) Company also donated 10 million Chinese yuan to Hubei province. Hoi Luk Fung Tong Heong Wui donated 5,000 masks and 4,000 medical protection uniforms to Hubei province’s Red Cross.
On February 2, Galaxy Entertainment Group announced a donation of MOP20 million to Hubei Province through Galaxy Entertainment Group Foundation. The donation was made under the coordination of the Liaison Office of the Central People’s Government in the Macau SAR.
Following public health concerns associated with the outbreak of the new strain of coronavirus, Melco Resorts & Entertainment announced it is working with the government to donate HKD20 million to support initiatives for Wuhan and Hubei.
Since then, casino operators SJM, MGM and Sands China have also announced donations of similar amounts to help fight the virus. The donations from Macau have all been given to mainland provinces for the purposes of purchasing medical supplies such as face masks.
Macau is not the only “compatriot” locality which has donated money to Hubei or the mainland in general during this outbreak. According to a statement released by the mainland Central Government, Hong Kong, Macau and Taiwan have donated a total of 143.7 million yuan to Hubei province in addition to resources and supplies worth 18.7 million yuan in total.
Most of the money was intended to be donated to mainland China’s relevant charity federations, such as the China Charity Federation in different cities or the Red Cross Society China.
These associations are supposed to use the donations to purchase medical supplies or to help those in need.
However, under the rapid development of the epidemic, the mainland’s Red Cross Society of China, which is a state-owned charitable organization, is under the spotlight once again due to allegations of corruption and misappropriation of donations.
In late January, Wuhan Red Cross went viral on mainland social media due to a donations scandal. As of January 30, Wuhan Red Cross claimed to have received 398.7 million yuan in donations. The government-owned organization only used 53 million, while over 300 million remains in its account. However, no details of the whereabouts of the spent 53 million were reported.
Earlier this week, the deputy director of Red Hubei Province’s Red Cross was dismissed from his position, together with another two leaders of the association.
At the same time, mention of Hubei Red Cross was removed from mainland social media and only posts from state-backed media CCTV, People’s Daily, China Daily and official government accounts could be found.