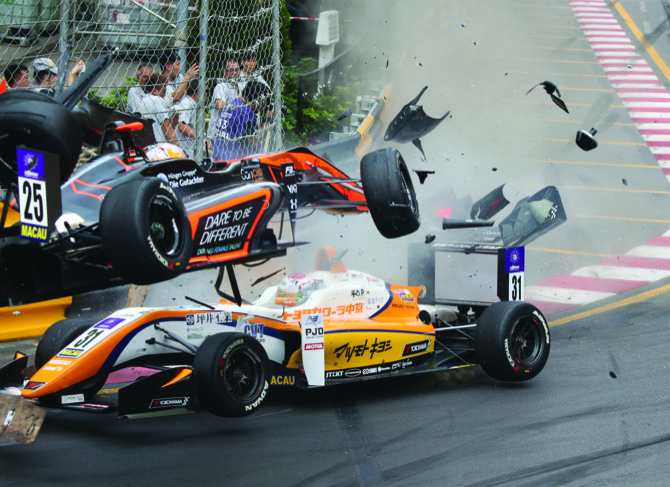 Flörsch suffered spinal fractures during Sunday’s Macau Grand Prix F3 race, after her mono-seat collided at high speed with Japanese driver Sho Tsuboi’s car, going through a catch fence at the Lisboa bend. The car then hit a photographers’ bunker on the perimeter and dropped to the ground with race marshals immediately on the scene.

The driver underwent a seven- hour long surgery yesterday at the Conde de São Januário Hospital Centre (CHCSJ). The operation lasted all afternoon and a press conference was held during the evening, with doctors involved in the proceedings revealing that Flörsch had shown signs of motion improvement at the last stages of the surgery.

However, surgeon of orthopedics and traumatology Chan Hon Mou cautioned that injuries similar to the ones suffered by the German driver are likely to lead to limited motion. “We are very concerned about this case. Because of her young age [17] we hope she will get well.” Chan explained that the surgery was “minimally invasive” and added that doctors are convinced she will regain the ability to walk after physical therapy, despite the fact that “the injury to her nerve was very serious.”

“She received surgery in due course and we are confident she can recover and perhaps race again,” he said.

According to Lau Wai Lit, chief of the orthopedics department of the hospital, the fracture suffered by Flörsch caused a major compression of the spinal cord and surgeons were not able to perform artificial spinal cord replacement techniques.

Questioned over how long the driver is expected to remain in Macau, Lau said that it would depend on her condition and the will of the family. “We assume she will be able to move her extremities in a short period of time,” he said. Local doctors are expected to monitor the racing  driver for around two weeks.

Clinical director of CHCSJ Lei Wai Seng revealed that doctors talked with Flörsch’s family and team (the Netherlands-based Van Amersfoort Racing) before it was decided to perform the surgery in Macau. Other options were considered, but doctors explained that the driver’s medical condition required immediate attention and to transport her elsewhere before her injuries are stabilized would be a difficult and dangerous task.

Besides Flörsch, four other people remain hospitalized due to injuries contracted during the GP weekend. Doctors said yesterday that none of them have serious injuries. The race marshal who was hit by debris from Flörsch’s car suffered face laceration and went through plastic surgery, remaining hospitalized “in good condition,” and will be discharged from hospital this week.

The photographer from mainland China who was at the bunker suffered a liver laceration and is expected to remain hospitalized and under observation for one week.

A British rider who suffered a more serious head injury during the motorcycle GP was subject to a seven-hour surgery and is now stable and conscious, with no brain injury detected. Another rider also remains at the CHCSJ, but his condition is not considered serious.

The incident involving Sophia Flörsch prompted an immediate red flag and a delay of around an hour before the race was restarted. FIA president Jean Todt posted a statement on Twitter saying the sport’s organizing body was “mobilized to help those involved and analyze what happened. “All my thoughts are with you @SophiaFloersch and the others injured. I wish you all a safe recovery.”