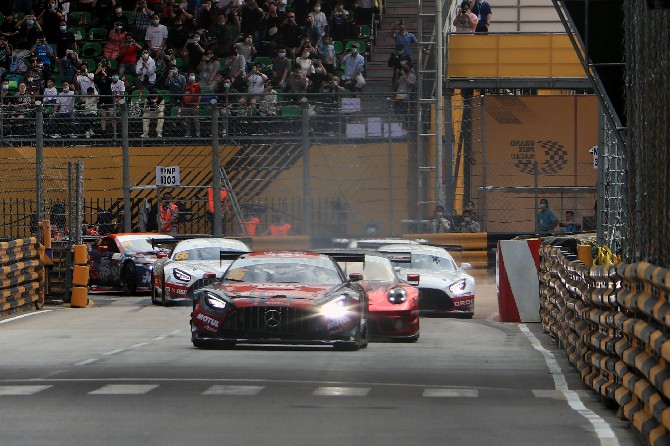 Hong Kong’s Darryl O’Young has finally doubled his title in the Macau GT Cup after his first win back in 2008.
13 years later, the Craft-Bamboo Racing driver — who has let a second title slip between his fingers many times after being lined up for success — finally overcame his bad luck and won yesterday’s 12-lap race of the Macau GT Cup.
Although luck was with O’Young during the final race on Sunday, a lot of the success was down to a sleepless night of hard work from his team. The AMG Mercedes GT3 from Craft-Bamboo Racing looked like it was nowhere near ready to race after the dramatic finish of Race 1 on Saturday, in which O’Young slipped on spilled engine oil braking into Lisboa Bend and hit the rail hard, severely damaging his car.
The subsequent red flag meant that he was ranked second in the qualifying race, but the challenge was getting the car into the grid for Race 2 on time.
In a press conference following the race, O’Young said the teamwork overnight was relentless, working over 30 hours to get the car in a condition to race.
“We made it onto the grid with 10 seconds to go. If we hadn’t pushed the car in while the gate was open, I wouldn’t have made it to the grid. So literally 10 seconds before [the paddock gate closed] we managed to put the car together. The guys worked […] all through the night, [they] did not stop for a second. This victory is for them. It’s unbelievable. When I looked to the car [on Saturday I thought] it was written off but they did everything possible,” O’Young said. He added that the race was difficult as the damage included a bent chassis, and all he could do after taking an initial lead was to control the race and hope that he could make it till the end.
Eventually, he succeeded, while benefiting from a safety car period lasting several laps for the removal of several cars that had crashed or stopped on the track.
O’Young paid back the team’s extra efforts for the race with a win in the 12-lap finale. The most important moment in the race came right at the start when he managed to jump polesitter Leo Ye Hongli despite being placed in second on the grid. From there he reached the first pass through Lisboa Bend ahead of the pack, a position that he held on to until the checkered flag flew.
With this win, the Hong Kong driver joins Keita Sawa, Edoardo Mortara, and Maro Engel as the fourth multiple winner of the Macau GT Cup, and the second (along with Mortara) to do so in cars from two different manufacturers.
At the press conference that followed the race, Toro Racing drivers Ye (Porsche 911 GT3R) and Luo Kai Luo (AMG Mercedes GT3) agreed about the heavy damage to O’Young’s car, claiming that the situation was dangerous and arguing that he should have been stopped from participating in the race.
“[For] the whole race, oil kept spraying on my screen. I couldn’t see anything towards the end of the race. And my tires were also covered in oil. It was very dangerous, I’m surprised that they didn’t call him in,” said Ye, backed up by Luo.
Despite these protests, race stewards certified the results, crowning O’Young the winner of the Macau GT Cup 2021. 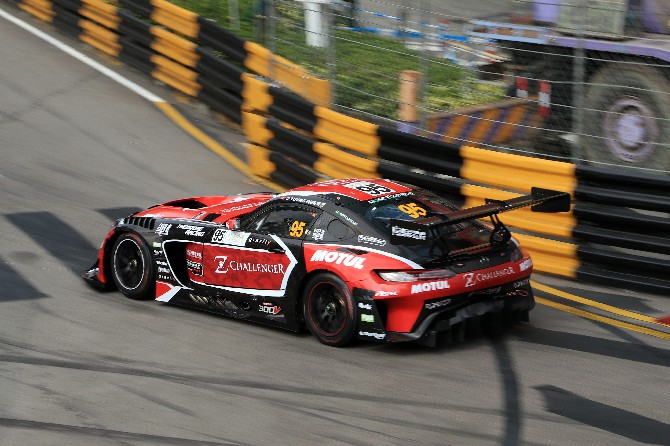