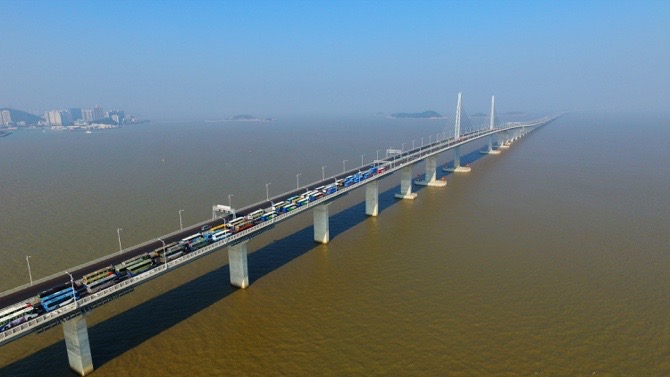 Macau and Hong Kong have reached an agreement regarding the circulation of private vehicles on the Hong Kong-Zhuhai-Macau Bridge (HKZMB) and the number of vehicle quotas to be allocated per city.

The Macau government announced yesterday that there will be a quota of 600 Macau- registered private (non-commercial) vehicles to travel to and from Hong Kong once the HKZMB is launched.

Among the 600 permissions under the cross-boundary initiative, a total of 500 will be valid for one year and the other 100 will have a six-month validity.

The regular quota for Hong Kong private vehicles entering Macau, via the cross-delta bridge, is set at 300 permitted vehicles, each with a three-year validity.

Macau and Hong Kong-bound vehicles registered under the regular quota initiative will have unlimited access to the neighboring Special Administrative Region (SAR). The Transport Bureau will soon announce more details regarding the arrangements for the relevant Macau- registered vehicles.

According to a statement issued yesterday by the Government Information Bureau, the Macau and Hong Kong authorities “have reached consensus on the topic, with a view to promoting closer ties between the two SARs on economic and trade matters, and in terms of people-to-people exchanges.”

Once the bridge is launched, Macau-bound users of Hong Kong-registered vehicles that have not been registered under the regular quota initiative will have an option to apply to join a transit scheme. Under it, drivers of Hong Kong-registered vehicles wishing to enter Macau via the bridge will be required to register in advance and reserve a space in a particular car park, which will have a total of 3,000 spaces for private vehicles.

This car park is at the eastern end of the artificial island that also accommodates the Macau boundary crossing checkpoint, which is the Macau end of the bridge.

It was also announced that drivers must follow mainland Chinese traffic rules by keeping to the right if they were to cross the HKZMB linking the three cities. Regardless of origin or destination, tolls on the bridge will be paid in renminbi, while non-cash payment methods include bank cards, as well as electronic wallets Alipay and WeChat Pay.

There will be a total of 140 shuttle buses travelling two routes: Hong Kong-Macau and Zhuhai-Hong Kong. Initially, such bus routes will depart with a frequency of every 10 minutes, while the authorities work to consider the possibility of shortening this time to three to five minutes according to future needs.

The Hong Kong-Zhuhai-Macau Bridge (HKZMB) is expected to open in the second quarter of this year.

The Monetary Authority of Macao (AMCM) stated yesterday that with the agreements reached by the governments of Macau and Hong Kong regarding the circulation of private vehicles, vehicle owners are required to have a valid road insurance covering the cities in order to use the Hong Kong-Zhuhai-Macau Bridge (HKZMB). According to AMCM, vehicle owners “need to possess a valid road insurance, according to the laws of each of the three jurisdictions, [which will be valid] in the areas of the corresponding region and according to their driving destination.”
The AMCM also warns, “citizens should plan their trip schedule in advance, acquiring insurance for the area of ​​the corresponding region, before entering the bridge,” reminding that local insurance companies are prepared to help in the acquisition of a vehicle insurance that is valid for the other two regions (mainland and Hong Kong).
According to AMCM, the insurance associations of the three regions will also create a thematic webpage about motorized vehicles insurance, aiming specifically to inform on the special characteristics and needs of the HKZMB.