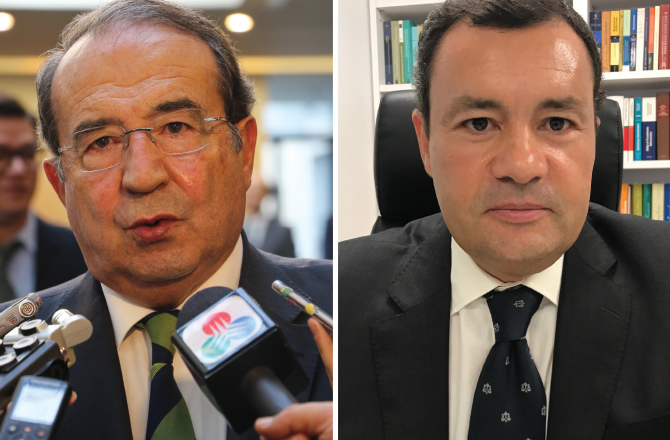 Lawyer Sérgio de Almeida Correia has withdrawn his candidacy for president of the Macau Lawyers Association (AAM), leaving the way open for incumbent Jorge Neto Valente to continue his decades-long tenure at the Association’s helm.

Yesterday was the deadline for the submission of lists for the December election. As the deadline passed, the only formalized list was that of Neto Valente, now likely to add two more years to the decades he has served as president.

Valente previously said that he did not approve of Correia’s candidacy and would oppose the challenger’s bid by putting himself forward for another term. The reason, he stated in simple terms, was precisely to oppose Correia, though he admitted his decision to run had been at the request of several of his peers.

Other lawyers, such as Jorge Menezes, Rodrigo Mendia de Castro and João Miguel Barros, had openly supported Correia’s candidacy, while Miguel de Senna Fernandes, Frederico Rato and former lawmaker Leonel Alves had welcomed the competition as a sign of the Association’s vitality.

In a letter provided to the media on Tuesday night, Correia, who was unable to formalize a list for the election by yesterday’s deadline, declared his withdrawal while denouncing what he saw as inappropriate attacks on his character in the campaign mustered by Valente.

“Immediately after my pre-candidacy was known, the current president made a series of statements and set off a series of actions that aimed to attack me and my practice, designed to discredit me in the eyes of my peers, which generated a climate of fear around the intentions of my candidacy,” wrote Correia.

“Although he has been in power virtually uninterrupted since the mid-1990s, and has taken advantage of this rostrum for numerous political statements, the President of AAM decided to re-apply, even as an alternative emerged, capable of bringing together most of Macau’s lawyers, including many who were being ostracized over the years. It was and it is your right to do so,” he said in the letter addressed to his colleagues and later distributed to the media.

However, “eternalization in power weakens institutions,” the letter continued in reference to the successive, uncontested elections of Neto Valente. “From the very first moment, instead of accepting a dispute with nobility and loyalty, he was aggrieved, […] anticipating a list of ‘rupture and confrontation’ that only he saw.”

“The president of the AAM criticized the lack of renewal of the TUI [Court of Final Instance] but he himself will only leave the scene when he is to choose the successor and when this corresponds to the profile that he wishes.”

Valente has repeatedly implored other candidates to run for the presidency of the Macau Lawyers Association, on occasion suggesting that he was ready to step down.

That was the case earlier this year when Valente hinted in a Radio Macau interview that he would not run for another two- year term. However, the incumbent president reversed his stance after hearing of Correia’s intention to run, explaining that he had been approached by several lawyers who considered Correia’s bid “not to be appropriate at this moment.”

According to Correia, Valente’s actions speak louder than words. The challenger wrote in the letter that Valente’s decision had ultimately “demonstrated the uselessness of the speeches he uttered over the years, each time invoking fatigue to continue to preside over the AAM.”

Valente recently confirmed that he favors a particular profile for the next AAM president. He said that he would prefer his successor to be Chinese, while implying that the next president should not be too hostile toward the government – or, like Correia, “aggressive and corrosive with the comments he makes towards the Chief Executive and the Legislative Assembly President” – nor does he wish his successor to be “angry with everybody.”

Valente’s opinion is shared by other lawyers, including Rui Cunha, who associated Correia’s candidacy with change as opposed to the stability brought about by the status quo. The lawyer and AAM supervisory board chairman told Macau Business that now was not the right moment for such change given that society is adjusting to a “sensitive period of Macau becoming a part of China.”

But for others, Valente’s response to Correia’s bid was a sign that the long-standing president was having trouble letting go.

In an email to the Times, Jorge Menezes said yesterday that “what should have been an exchange of ideas and a democratic election was perceived as a battle following the personal attacks on Correia. A battle to be won by the strength of power, not by the merit of reasons.”

Menezes also said that lawyers who privately supported Correia were afraid to come forward and have their names added to the challenger’s list.

“[Valente’s] whole campaign strategy, it seems, was to bar Correia from finding a team and therefore avoid undergoing a secret vote,” said Menezes. “The key question is, why was the president so worried about facing a secret ballot?

“Instead of instilling debate and lead by example, the president lowered the standards to an all or nothing fight to retain power, showing that his decade- long claims of alleged sacrifice in running the AAM are not be taken seriously. It is sad, because he did a lot for the AAM and Macau’s justice system in the past, and we all owe him that. We really do. He could have left on a high moral ground, but sadly power changes people and he couldn’t let go.”

The Valente-Correia feud has revealed deep divisions within the society of Macau lawyers. This is touched upon several times by Correia in the letter, who noted “from the outset it became clear that my goal was to strengthen the AAM. And not to split it. Because divided already it is. And those who go to general assemblies have long seen this.”

In an apparent response to Valente’s suggestion that the next AAM head should be of Chinese ethnicity, Correia wrote, “there are no first and second lawyers. There are no Portuguese and Chinese. There are only lawyers. People who work, people who are honorable, people who fulfill.”

Neto Valente was out of town yesterday and could not be reached for comment, a representative at his office informed the Times. Several other lawyers who were contacted for their opinion did not reply by press time.

Asked to expound on the points made in his letter, Correia wrote to the Times, “I don’t want to comment any further on the election for now. I reserve my opinion for the election period [during the first fortnight of December]. All I have to say for the time being is in my letter sent Tuesday night.”