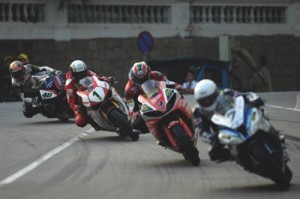 The mythical Michael Rutter, eight time winner and record holder for victories in Macau will be riding this year with Milwaukee Yamaha

Now in its 48th year, the 2014 Grand Prix will include thirty-one riders from ten countries. The Brits are well-
represented, and one of the most anticipated is Stuart Easton, triple winner of this race from 2008 to 2010 and absent from it on the last two outings.
This time Easton will be teaming up with another of the favorites and winner of last year’s race, Ian Hutchinson, racing this year with a Kawasaki.
Speaking of changing bikes, the already mythical Michael Rutter, eight-time winner and record holder for victories in Macau will be riding this year in the place left by Ian Hutchison with Milwaukee Yamaha. Although he only counts one victory in Macau on his CV, we should never rule out the man that is probably the most successful road racer of his generation, John McGuinness. A constant presence in Macau, he will also be back, focused and waiting for one chance to get to the top.
Another surprise is the return of the “man of the moment” of road racing, Northern Ireland’s Michael Dunlop, after a two-
year absence. On just his second visit to Macau after two major victories at the NorthWest 200 this year, and four wins at the Isle of Man, he will be riding the winning bike from Frohburg, a Rico Penzkofer BMW.
Always on the front line will be a couple of names that have become familiar to race fans in Macau: Gary Johnson (Quattro Plant Honda) was third last year and wanting to do the same this year, as well as Martin Jessopp (Riders Motorcycles BMW),  another podium seeker.
Also looking for spots in the elusive top ten are another two returning riders, this year racing on the recently created local Team CF Racing Team 32. The South African Allann-Jon Venter will be partnering last year’s best rookie, Portugal’s Andre Pires, both riding well-
prepared Macao Team Yamahas.
With such a large number of talented competitors and great two-wheel machines on track, predictions are close to impossible; but one thing is certain – there will be a thrilling racing action on display on the Guia circuit! Renato Marques

IN THE GP PADDOCK 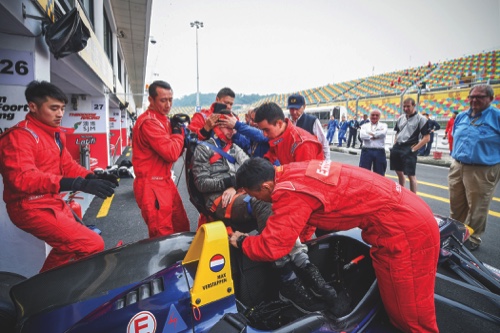