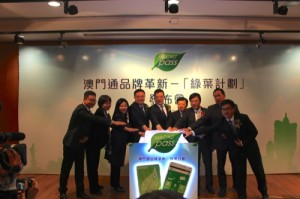 Macau Pass, the widely accepted smart card system, has extended its services beyond being just a bus card, and is preparing to launch online and mobile payments, as well as e-commerce services, next year.
Managing director of  Macau Pass S. A., Mr George Zhang, revealed to the media that the company is collaborating with renowned e-commerce companies to extend its services into these new business domains.
“We won’t take risks; we’ll take reference [from] the successful solutions in neighboring regions and introduce an online payment platform that is suitable to the local market,” he said. “The details are still commercial secrets; three months later we’ll have a related announcement.”
Last week the company released an upgraded version of their chip cards, along with a mobile application for the Android system, where users can check and update their Macau Pass balance by placing the card below their NFC-enabled phones.
The updated pass also allows users to register their card with personal information, such as name and mobile number, so that they can file reports of lost cards within 24 hours.
Starting next January, registered users can recharge their pass through the new mobile app linked with a bank account. Each bank account can be connected to a maximum of four Macau Pass cards and transfer up to MOP1,000.
According to Mr Zhang, Bank of China and the OCBC Wing Hang Bank will be the first two to provide such a service in January, and other banks in Macau will join soon.
To gain user acceptance from mainland tourists, the company has partnered with Alibaba’s online payment platform Alipay, to sell prepaid Macau Passes online to those who are planning a trip to Macau.
“It’ll facilitate tourists’ bus ride and their trip here,” said Mr Zhang. Launched last week, the service allowed users to buy a Macau Pass online in the mainland and collect it upon arrival through service counters set at Macau’s border terminals.
Currently the Macau Pass app is only available in Chinese; an English language version will be released in a few months. BY