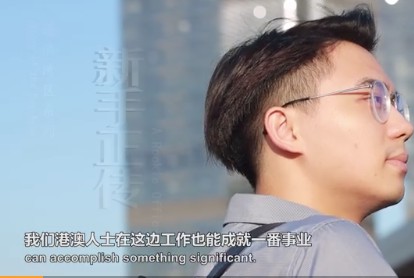 In 2019, the State Council of China rolled out a new proposal to allow Macau and Hong Kong residents to work in mainland government departments in the Greater Bay Area. The program caught the attention of the media this week as government entities on the mainland again opened their applications to residents of the SARs.
In April, a Macau resident by the name of Liu Yanxin was admitted as a civil servant in Guangzhou, the provincial capital of Guangdong province. State media outlet China News recently interviewed Liu and found that this pioneer had decided to join the public administration because of his love and passion for the country.
Titled “The Colorful Life of Macau People,” the interview opened with a short monologue from Liu: “We are the first batch of civil servants from Hong Kong and Macau to work on the mainland. We must do well to let the country see that young people from Hong Kong and Macau can accomplish something significant.”
The interview touched on Liu’s current work situation, his early years and his future prospects and aspirations.
In the first segment, it was mentioned that Liu has been working as an investment promotion specialist in the Nansha New Area Industrial Zone of the Development Authority of Guangzhou. Over the past three months, he has been in charge of three major projects, including the Guangzhou campus project of the Hong Kong University of Science and Technology, the Information Industrial Park of China Railway Tunnel Bureau, and the Fine Sculpture Project in Beijing.
The same Guangzhou government department hired three people from Hong Kong, in addition to Liu. Liu believes that coming from the SARs gives him and his Hong Kong colleagues a “unique advantage to reduce communication costs among Guangzhou, Hong Kong and Macau.”
As in other interviews concerning SAR residents in the mainland, Liu’s patriotic sentiment towards the country is also highlighted at the center of the story.
Liu graduated from the School of Government at Peking University, which, thanks to his parents, had been Liu’s dream school since he was a child. 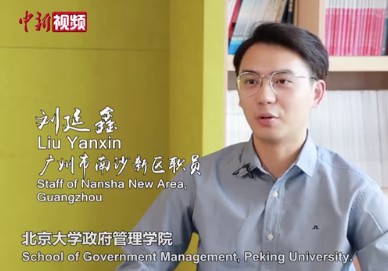 Liu’s mother was born in Macau and his father was born in Guangzhou. Since Liu was young, his parents had told Liu stories about Peking University. Consequently, Liu started to consider studying at the capital city university.
Both Liu and his parents are patriotic citizens of the country, and the family’s passion for the nation is apparently reflected in their devotion to watching Tiananmen Square flag-raising ceremony from the best spot.
“On the second day after I arrived Beijing, my parents grabbed me from my bed even before dawn to hurry up to Tiananmen Square to watch the flag-raising ceremony. Otherwise, we would not get a place in the front row,” Liu recalled. “They regarded [flag-raising] as a solemn and prudent matter. The first time I saw the soldiers raising the flag slowly, I naturally felt a national pride coming from the bottom of my heart.”
This emotional flag-raising ritual became one of the forces behind Liu’s decision in staying in the Greater Bay Area for a career.
“Liu gave up his comfortable Macau life,” as China News described.
Like many other Macau residents who have decided to work in the mainland China and received backlash from their relatives, staying in Guangzhou stirred disapproval among Liu’s friends and family relatives. However, these stories always end with the disparaging ones being jealous of those who chose the mainland China over Macau.
“At first, my friends and classmates in Macau could not understand why I insisted on working in mainland China. [They asked me] what are you expecting? Are you looking for hardships for yourself? […] After a period of working, […] they were gradually attracted by my work and they would ask me to recommend good jobs [in mainland China] for them,” Liu recollected.
According to Liu, those who attempted to prevent him from working in mainland China eventually became impressed by his experience working on high-end projects, especially given the fact that Liu is still a “rookie.”
As is customary, at the end of the interview, the great prospects of the Greater Bay Area were highlighted by the Macau resident. Liu believes that the Greater Bay Area is an emerging world-class bay area with global influence.