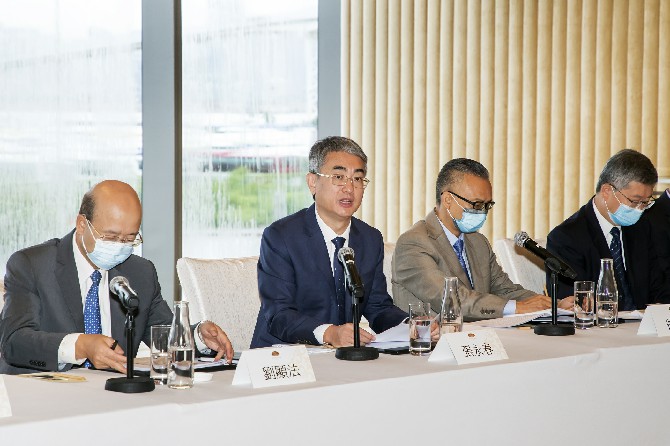 To celebrate the Chinese Communist Party’s (CCP) centenary, The Office of the Commissioner of the Ministry of Foreign Affairs of the People’s Republic of China in the Macau Special Administrative Region hosted a seminar yesterday to raise awareness of President Xi Jinping’s diplomatic propositions amongst Macau’s residents.
In his opening speech, Commissioner Liu Xianfa affirmed that Xi’s diplomatic philosophy, put forward in the 18th CCP National Congress, has carved out a “remarkable new diplomatic concept and achieved historical success.”
Under the nation’s overarching diplomatic policy, Macau-related diplomatic policies have flourished, creating a favorable climate for the implementation of ‘One country, two systems’ in Macau, Liu stated.
He further suggested Macau continue to firmly enforce the principle of “patriots governing Macau” to safeguard national security and further accelerate the city’s prosperity and stability.
In alignment with the nation’s 14th Five-year Plan, promulgated in this year’s Two Session as well as in the Belt and Road Initiative, Liu encouraged Macau to “cultivate new edges and attain new progression.” The Commissioner noted that enacting this approach would be in line with China’s new development philosophy.
The 14th Five-year Plan notes that this year is the 100th anniversary of the establishment of the CCP, marking the outset of the nation’s path to constructing a modern socialist China.
Secretary for Administration and Justice Cheong Weng Chon also delivered a speech at yesterday’s seminar. In it, he expressed his gratitude for the seminar which, he stressed, is influential in helping the locals understand the fundamental principles underlying Xi’s diplomatic philosophy.
“In the face of ever-changing international situations, President Xi Jinping precisely grasps China’s historical position and global development trends in the new era. He proposed a set of new concepts, propositions and proposals, which provide profound answers to China’s diplomacy in the new stage,” Cheong stated.
He added that the ideas introduced by Xi’s policy—which include building a community with a shared future for mankind, forging collaboration-oriented international relations and promoting equal treatment for all—are of great importance.
As an international city, Macau has been a crucial bridge connecting China and foreign countries in history. When faced with unprecedented changes across the past century, Macau should look to Xi’s diplomacy doctrines for guidance, Cheong stressed.
Meanwhile, the city should further consolidate its status as a World Centre of Tourism and Leisure from a “broadened international perspective,” and help strengthen the ties between China and Portuguese-speaking countries to develop a stronger rapport with foreign countries and regions.