Macau to have legal jurisdiction over Lotus Bridge soon 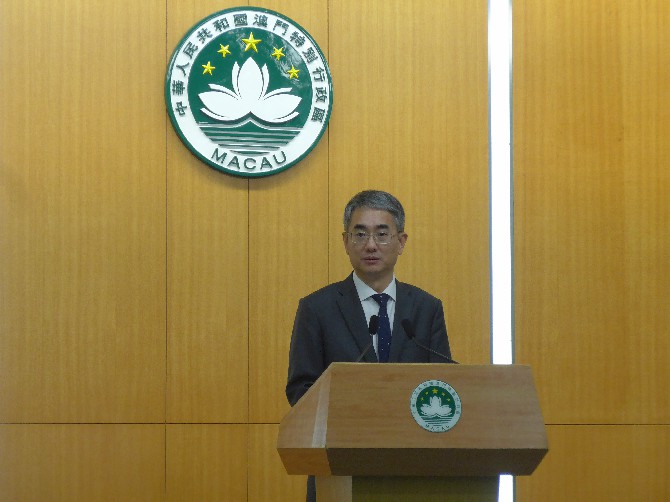 The Lotus Bridge will soon be under the legal jurisdiction of Macau, according to Secretary for Administration and Justice André Cheong, who confirmed the news yesterday in his capacity as spokesperson for the Executive Council (ExCo), the advisory board of the Chief Executive.
Cheong also said that the change will come into effect once the new Hengqin Border Control Building and local legislation regarding the Macau border control facilities within the building get approved.
Cheong was appointed as the ExCo spokesperson not long before yesterday’s press conference. The press conference was held to release news about local legislation for the Macau border control section at the nearly finished Hengqin Border Checkpoint Building.
According to a national directive, border control measures of the SAR and mainland China will be conducted within one building at the Hengqin border.
This is similar to the border control post of the mainland at the Hong Kong- Zhuhai-Macau Bridge.
The main difference is that Macau will be responsible for conducting border control on the mainland side too. As such, local legislation is required to facilitate the arrangement.
“I don’t see this as complicated legislation,” said Cheong. “We have actually enacted a similar piece of legislation before, which is the 3/2013 legislation.” The law from 2013 provided legal grounds to relocate the University of Macau to Hengqin.
The national directive has also stipulated that, apart from the Macau border control area within the border building, that there will be three “extensions” to the SAR’s legal jurisdiction.
The Lotus Bridge will be the first extension to be covered by Macau laws. The others will be a bridge connecting the University of Macau on Hengqin with the other parts of Hengqin, and the future Light Rail Transit extension to Hengqin.
“In the future, civil and criminal matters that take place on the Lotus Bridge will be within Macau’s jurisdiction,” explained the ExCo spokesperson. “On the other hand, the bridge [connecting the University] has only been planned.”
An exception is that the piers of the bridges will be managed under mainland laws.
The Secretary hopes the legislation will be enacted by March. He stressed that the legislation is essential to the opening of the border control building, as without the legislation, Macau authorities cannot work within the building.
Cheong started the press conference by thanking the Chief Executive for the appointment, while expressing his hopes to build good relationship with the media.