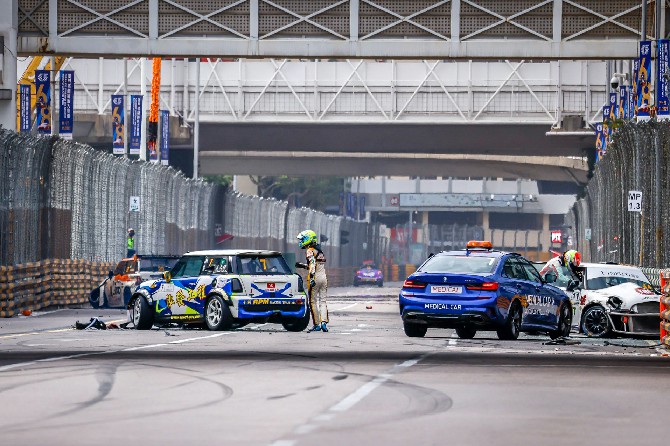 A massive pile-up involving at least a dozen cars from the Macau Touring Car Cup category brought the race to an early end during the eighth lap out of a planned 12.
The race had been halted for a period by the safety car to allow the removal of a vehicle driven by Jun Wong, which had stopped on the track in a dangerous position. As soon as the safety car pulled out of the track to allow the race to resume, Cheang Kin Sang’s car failed to turn at R Bend, hitting the safety barriers on the exit of that turn. The Chevrolet Cruze driven by Lam Ka Chun was also involved in the accident, crossing the track uncontrollably and causing a roadblock that caught a number of contestants by surprise as they were in close proximity following the safety car’s intervention.
A few frontrunners managed to escape the pile-up which started from sixth position onwards, only to be caught in a second crash caused by the spin-off of race leader Célio Alves Dias at the Reservoir Bend. Like the prior accident, this incident saw Dias’s Mini Cooper S cross the track, causing contact between other cars. These included cars driven by Rui Valente and Lui Man Fai, who also crashed hard and took severe damage.
In a near-miracle, both crashes saw the drivers walk away with just a few bruises, despite the damage incurred by their cars.
Per the usual procedures for these situations, race stewards determined the final race classification at the time of the last complete lap before the red flag incidents, meaning that Dias came out the winner, having dominated Race 1 on Saturday. In second place was Sabino Lei, with Lui completing the podium.