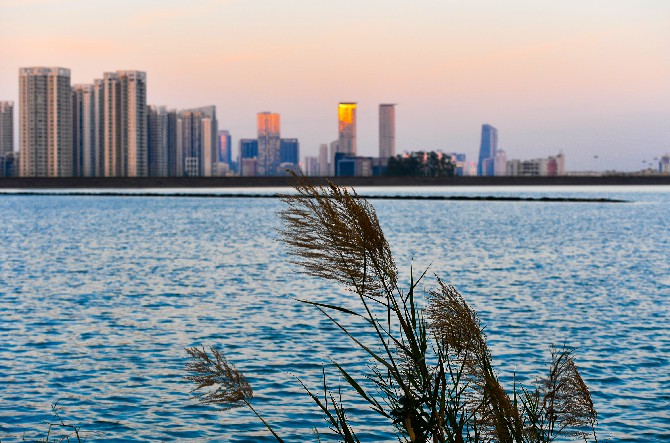 A view of the Zhuxiandong reservoir, which has been delivering water to Macau

For those who still remember what it was like to suffer from water shortages, like 80-year-old Macau resident Lee Zan Dok, fresh and clean water is seen as the lifeline of everything.
With a land area of only 32.8 square kilometers, Macau is extensively covered with low hills, free from any lakes or rivers, making it impossible to build a big reservoir in this already tiny area.
“For centuries, local residents’ water demand was met largely through groundwater extraction,” said Lee, who worked for Macau’s water supply company for 24 years.
Lee, also the author of a book on 500 years of water affairs in Macau, recalled that residents had relied on groundwater for hundreds of years.
Macau’s development picked up pace in the mid-1950s, as did its population, which increased to more than 100,000, leading to a surge in water demand.
Local people suffered acute water shortages, and groundwater over-exploitation was inevitable. The city was filled with over 2,000 wells.
“People had no choice but to drink muddy and polluted well water,” Lee said.
The local government had to impose a limit on water use starting from 1955 and several more limits during the following decade.
Suffering from extended water shortages, Macau proposed to work with the mainland to deal with the crisis. Diverting water from the neighboring mainland city of Zhuhai was an initial attempt to address its water scarcity.
In 1959, two reservoirs were built in Zhuhai under cooperation between Macau and the Guangdong provincial government. The reservoirs began to deliver water to Macau residents the following May.
However, the plague of water scarcity engulfed Macau again when the reservoirs could barely meet the water demands of the two increasingly booming cities.
Zhuhai was designated as a special economic zone in 1980, resulting in an expanding population and urbanization. A water diversion project was therefore launched to take water from the Xijiang river, a tributary of the Pearl River, to Macau.
“Diverting water from the Xijiang river to Macau never came easy. Workers had to toil to complete the project,” said Chen Shan from Zhuhai’s water supply company.
Within two and a half years of construction, the first phase of the project entered operation in 1988.
However, salt tide, a phenomenon in which the lower course of a river becomes salty when discharge is low during the dry season, struck the lower course of the Pearl River in the winter of 2003. The salinity in reservoirs exceeded 10,000 degrees, far beyond the national standard of 250 degrees, posing a huge threat to human health, crop growth and industrial production.
To handle the crisis, meetings were held to pool wisdom from government water departments, hydropower stations and power companies.
In 2005, a gigantic trans-provincial project was conducted to divert fresh water from reservoirs located at the upper reaches of the Xijiang river to dilute the salty downstream.
The complexity of the project was beyond everyone’s expectations. But the attempt proved successful as a total of 850 million cubic meters of water traveled 1,300 km south, ending the water shortage facing residents of Zhuhai and Macau.
To permanently secure the water supply during dry seasons, a mega water system, with a volume amounting to 43.33 million cubic meters, was built in 2011, bringing Zhuhai’s total water storage to 100 million cubic meters.
“People in Macau have not been affected by the salt tide or water shortages since the system was put into operation,” said Chu Wai Man, vice manager of Macao Water Supply Company.
This year marks the 60th year since Zhuhai began to deliver water to Macau. Official data show that Zhuhai’s annual water supply to Macau has topped 100 million cubic meters, today accounting for 98 percent of Macao’s freshwater consumption.
In October, a 15-km-long water supply line to Macau, the fourth in number, entered operation, with a designed volume of 200,000 cubic meters per day.
“Constant water supply from the mainland has not only brought guarantee to people’s lives, but injected impetus into Macao’s economic development,” Lee Zan Dok said. Xinhua