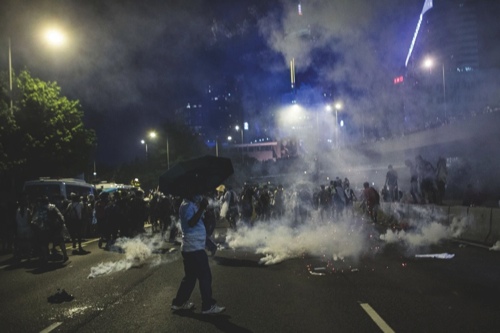 On a day when front pages of newspapers in Hong Kong and around the world carried stories on pro-democracy protesters confronting riot police in the city, the lead article in China’s official People’s Daily focused on a new book of President’s Xi Jinping’s speeches.
The Communist Party’s flagship newspaper didn’t mention the protests at all in today’s print edition, looking instead at how the compilation of Xi’s speeches had been translated into several languages. A top story on the Xinhua News Agency’s website discussed changes to Chinese family life over the past 65 years. The state-run Global Times said the “radical activists are doomed.”
China’s government took broad steps to limit the flow of information about the Hong Kong protests to its population of almost 1.4 billion people. What coverage there was in state media of the demonstrations argued that the confrontations were illegal and lacked widespread support.
“It is completely unsurprising that the Chinese government has a big fear of news of what is essentially a pro-democracy demonstration streaming to China,” said Brad Williams, an assistant professor of Asian and international studies at the City University of Hong Kong. “Significant social turmoil has been caused by protesting students.”
That was a reference to the government’s move in 1989 to crush the student-led pro-democracy protests in Tiananmen Square in Beijing. Xinhua published a story yesterday saying that people from all walks of life in Hong Kong denounced the rally.
A Xinhua story in English said protesters “violently charged the police cordon line on Sunday” and police fired tear gas “when repetitive warnings ended in failure.” On its English-language website, the People’s Daily said the protests had “spun out of control” Sunday.
Chinese regulators demanded websites clear information about the Hong Kong protests, according to the Berkeley, California-based China Digital Times website, which tracks the government’s media control efforts.
China Central Television, China’s state-controlled broadcaster, reported on the protests without showing images of the clashes. One piece said that the Hong Kong government has listened to the public, with another package on China opposing “unlawful action” in Hong Kong.
Posts on the Weibo microblogging service delivered images and foreign media coverage of the protests to Chinese readers, though government censors deleted many posts, David Bandurski, editor of the China Media Project website of the University of Hong Kong, wrote yesterday.
“As of mid-day, most major news sites had no prominently placed coverage at all,” Bandurski said on the project’s website. Bloomberg