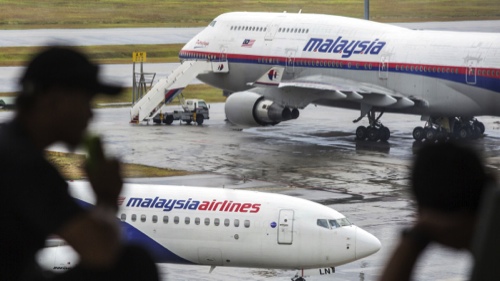 Malaysia’s national carrier, kept afloat with billions from the government in the past six years, got yet another lifeline after two high-
profile jet disasters this year left its image in tatters.
Malaysian Airline System Bhd. minority shareholders have been offered an exit after sovereign wealth fund Khazanah Nasional Bhd. said it would pay 1.38 billion ringgit (USD429 million) to take the carrier private. This is a first step and more painful measures may be needed to turn around the airline with a “comprehensive and holistic” restructuring plan, Prime Minister Najib Razak said Aug. 8.
Shareholders “should accept the offer,” said Daniel Wong, an analyst at Hong Leong Investment Bank Bhd. in Kuala Lumpur, as he predicted a “bleak” future for the carrier. “You’re getting an exit point at a premium price, you’re still making a profit. Why not? Unless you are thinking that MAS can turn around within the next two years.”
Taking Malaysia Airlines private is an initial step in repairing the image of the carrier after two accidents this year – one over Ukraine and another where investigators are still looking for wreckage after five months – claimed the lives of 537 people. Najib and his government came under criticism for their handling of Flight 370’s disappearance and restoring the reputation is essential to lure back passengers amid fierce competition with budget airlines.
Khazanah’s offer to buy the 30.6 percent stake it doesn’t already own in the Subang, Malaysia-based company at 27 sen per share is 12.5 percent higher than the stock’s Aug. 7 closing price. The shares, which were suspended Aug. 8, rose 8.3 percent to 26 sen as of 9:39 a.m. local time, paring this year’s decline to 16 percent.
The airline has been bailed out before. In 2002, the government tightened its grip on the carrier under an asset reorganization plan that gave it 69 percent of the company. The airline called for rights-share offerings in September 2007, February 2010 and May 2013, requiring Khazanah to cough up 4.8 billion ringgit to maintain its stake.
Flight 17 was shot down in Ukraine in July, four months after a jet en route to Beijing from Kuala Lumpur vanished. The plane that disappeared in March put the carrier under global scrutiny and prompted boycotts in China, whose nationals accounted for most of the passengers. There is no trace of the plane in what has become the world’s longest search for a missing jet in modern aviation history.
Before the disasters, Malaysia Airlines had racked up 4.13 billion ringgit in losses over the previous three years. The carrier will probably lose more than 1 billion ringgit in 2014, according to average analyst estimates compiled by Bloomberg.
Malaysia Airlines’ board said it will take Khazanah’s proposal to shareholders in an extraordinary general meeting. Details of the restructuring plan will be announced before the end of August, Najib said.
Investors shouldn’t expect a better offer from Khazanah, said Mohshin Aziz, an analyst at Malayan Banking Bhd. in Kuala Lumpur. When the airline reports its second-quarter performance, financial results will be “awful, perhaps the worst in its history,” he said in an Aug. 8 note.
“When that happens, it will definitely spook everyone and evaporate any hope for a revised offer,” Mohshin said. The company may report earnings later this month.
For now, the carrier has said it will continue to operate all its flights. Malaysia Airlines may scale back its network and withdraw from unprofitable routes as part of the restructuring, said Tan Kee Hoong, an analyst at Alliance Research in Kuala Lumpur.
“This would remove the excess capacity within the industry, and bring yields to more sustainable levels,” he said. That would benefit other domestic airlines such as AirAsia Bhd. and AirAsia X Bhd., Tan said.
Others are poised to lose. In-flight food caterer Brahim’s Holdings Bhd. counts Malaysia Airlines as its biggest customer. Its shares fell 2.3 percent yesterday, and have dropped 7.6 percent in 2014.
Petronas Dagangan Bhd., Malaysia’s biggest supplier of jet fuel, said in June that a restructuring of the airline would have little impact. Still, analysts at CIMB Group Holdings Bhd. lowered 2015-2016 jet fuel sales volume assumptions for the company by 10 percent to reflect lower demand from Malaysia Airlines.
Malaysia Airports Holdings Bhd. may also be affected. Its shares have fallen 16 percent this year, and Chief Financial Officer Faizal Mansor in June attributed the decline in part to investor concern of a possible Malaysia Airlines bankruptcy. Malaysia’s passenger arrivals this year have been dented by the disappearance of Flight 370. Bloomberg