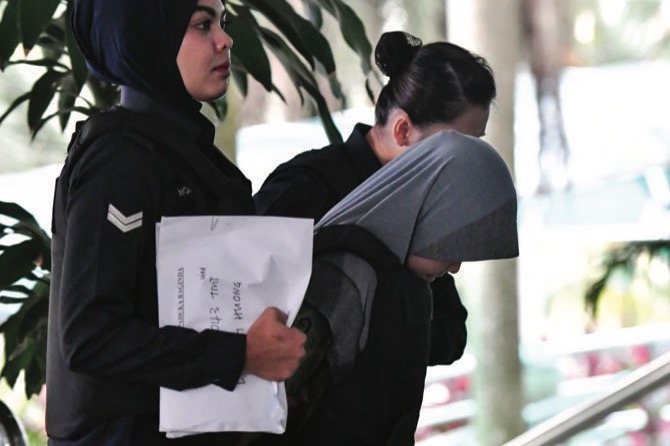 Circumstantial evidence against two women accused of poisoning to death the estranged half brother of North Korea’s leader is feeble, the women’s lawyers told a court yesterday, as they urged the judge to acquit their clients.

Siti Aisyah, 25, of Indonesia and Doan Thi Huong, 29, of Vietnam are accused of smearing the banned VX nerve agent on Kim Jong Nam’s face in a crowded airport terminal in Kuala Lumpur on Feb. 13, 2017. The women, who face the death penalty if convicted, have pleaded not guilty, saying they thought they were taking part in a harmless prank for a hidden-camera show.

They were charged with colluding to murder Kim with four North Koreans who fled the country on the day of the incident. The crux of the case revolves around whether the women intended to kill Kim or if they truly were scapegoats duped by North Korean agents into taking part in a high-profile political assassination.

“There were doubts and gaps that stood out like a sore thumb […] what actually happened at [the airport] at the material time has remained a mystery,” Gooi said in his closing argument. “The role purportedly played by the four persons still at large will continue to remain a mystery until they are brought to the court of justice.”

Hisyam Teh Poh Teik, one of three lawyers for Huong, said there was “no suspicious conduct or behavior that portrays she had committed an act of murder.” Huong was detained after she returned to the airport two days later wearing the same black shoes and sling bag, he said.

“In our combined 90 years of legal practice, we have not come across a murder case where an accused commits murder in broad daylight and in full view of the CCTV cameras, goes back to the scene of crime two days later in similar circumstances. […] The strength of this piece of subsequent conduct evidence buries the prosecution’s case,” Teh said.

Both lawyers said the women didn’t know Kim and had no motive to kill him.

Gooi said there was no video footage of Aisyah physically attacking Kim, of anyone putting any substance on her palm or of Aisyah washing her hands after the incident. She didn’t suffer any symptoms of VX poisoning, and no trace of VX was found in her fingernails, as was the case with Huong, he said.

In security video replayed in court yesterday, a blurry and unidentified figure standing near Kim was seen hurrying away after Huong clasped her hand over Kim’s face.

The defense lawyers said the women’s conduct — including not wearing gloves, not disposing of their tainted clothing, failing to flee and cooperating with police — showed their innocence. Aisyah had even boasted about her role as an actress in prank videos on social media, while Huong had a plane ticket to return to Vietnam on Feb. 23 last year, the lawyers said.

In contrast, the four North Korean suspects changed their attire at the airport before fleeing right after the incident, indicating their guilt, they said.

“This is a political assassination undertaken by North Korea. It is obvious. It is equally obvious that the killers were the North Koreans,” Teh said. “Without the [four] North Koreans, any conviction of the two accused will not be safe, will not be fair.”

Gooi said the presence of a degradation product of VX found on Aisyah’s sleeveless shirt was questionable because a chemist had disposed of the tainted part after testing and didn’t preserve it for the court’s verification and scrutiny.

Both lawyers slammed the police investigation as shoddy and lopsided, saying the women would not have been charged if the probe was objective. Gooi also said that police failed to investigate where the VX came from and that it would have been “tantamount to a declaration of war” if it was brought in by the North Koreans.

The lawyers said prosecutors failed to present a solid case against the women and urged the judge to acquit them.

Kim, the eldest son in the family that has ruled North Korea since its founding, had been living abroad for years after falling out of favor. It is thought he could have been seen as a threat to North Korean leader Kim Jong Un’s rule. Malaysian officials have never officially accused North Korea of involvement in Kim’s death and have made it clear they don’t want the trial politicized.

“No scapegoats can accomplish this mission,” prosecutor Wan Shaharuddin Wan Ladin told The Associated Press before yesterday’s court session began. “You must be trained. No room for failure.” Eileen Ng, Shah Alam, AP