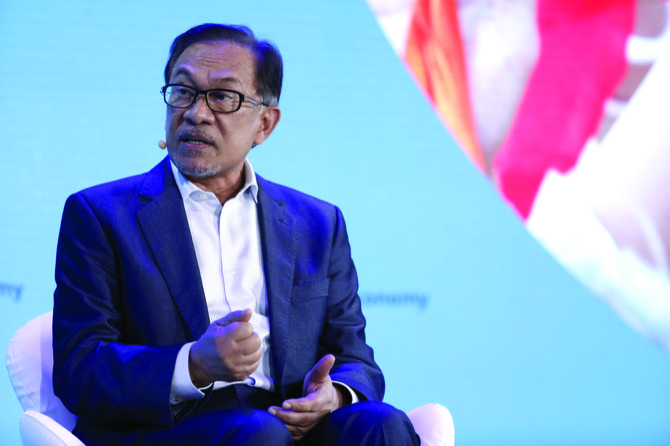 Malaysia’s leader-in-waiting said the government is looking into more Goldman Sachs Group Inc. deals carried out by Tim Leissner, the former partner whose work on 1MDB’s fundraising dragged the Wall Street firm into one of Asia’s biggest corruption scandals.

Anwar Ibrahim, speaking in an interview at the New Economy Forum in Singapore, didn’t identify any specific transactions. He also said it would be “inexcusable” if Goldman were complicit in the scandal surrounding the state investment company known as 1Malaysia Development Bhd., levying among the harshest and most direct criticism of the U.S. bank so far by a Malaysian politician.

“We are looking at other earlier involvements, other deals in the country, whether they’re transparent,” Anwar said. “Although the focus is on 1MDB,” investigators in Malaysia and the U.S. are probing earlier deals in which Leissner was involved in the Southeast Asian nation, he said.

Goldman has been under scrutiny for years for its role in raising USD6.5 billion for 1MDB and for the nearly $600 million in fees and commissions it earned from the bonds. 1MDB is at the center of a global scandal involving claims of embezzlement and money laundering, which have triggered investigations in the U.S., Singapore, Switzerland and beyond.

There are ongoing discussions about recovering money from financial institutions including Goldman, Anwar said. He is expected to replace 93-year-old Mahathir Mohamad as prime minister in a year or two.

“They must understand that to be complicit to the excesses and crime, is inexcusable and in the process the country and the people suffer,” Anwar said in response to a question on whether he plans to meet with Goldman executives who are also attending the NEF forum. “We must get hold of every cent that has been taken out of the country by either the leaders or those complicit in this action.”

The New Economy Forum is being organized by Bloomberg Media Group, a division of Bloomberg LP, the parent company of Bloomberg News. Goldman’s Chief Executive Officer David Solomon and former president Gary Cohn are among those attending the forum.

Fallout from working with 1MDB had led to a wider collapse in Goldman’s once-thriving business in Malaysia in recent years, which it once said offered “very positive” prospects. Work advising Malaysian clients on mergers and acquisitions, share offerings and bond issues also all but evaporated, and senior bankers involved in Malaysian deal-making left.

Goldman arranged two separate $1.75 billion bond placements for 1MDB in 2012, and a $3 billion debt sale in 2013. It has for years said it believed the money it was raising for 1MDB would be used for development projects, and that fees and commissions “reflected the underwriting risks” it had assumed. Authorities have said cash instead went into yachts, luxury real estate, paintings and jewelry, as well as into private bank accounts.

“We need to go to due process, but if they are prepared to negotiate, they have to return” about $600 million of the fees and commissions, Anwar said, adding that he has no plans to meet with Goldman executives in the city-state as investigations are ongoing.

In the first charges against individuals by U.S. prosecutors made public last week, at least three senior current or former Goldman executives including Leissner were implicated. Leissner, once Goldman’s Southeast Asia chairman, pleaded guilty to conspiring to launder money and confessed that he bribed officials in two countries – Malaysia and the United Arab Emirates – to get bond deals for Goldman.

He also admitted that he and others arranged the 1MDB fundraising as bond offerings because it would generate higher fees for the bank. As part of his settlement, he will forfeit almost $44 million. Former Malaysian premier Najib Razak, who once chaired 1MDB’s advisory board, is facing several charges of wrongdoing in Malaysia related to the fund, and has pleaded not guilty.

Leissner was a fixture in Malaysian dealmaking in the late 2000s. The bank led the league tables for arranging dollar bond sales by Malaysian companies from 2011 to 2013, bolstered by the 1MDB debt offerings. Around 2011 and 2012, it raised $1.6 billion in two offerings on behalf of the Sarawak state government. Chanyaporn Chanjaroen, Haslinda Amin, Bloomberg