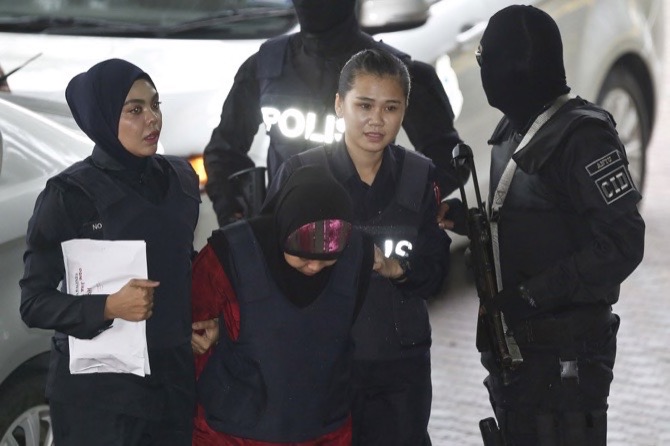 Indonesian Siti Aisyah (above, left) and Vietnamese Doan Thi Huong are escorted by police as they arrive for court hearing at Shah Alam courthouse 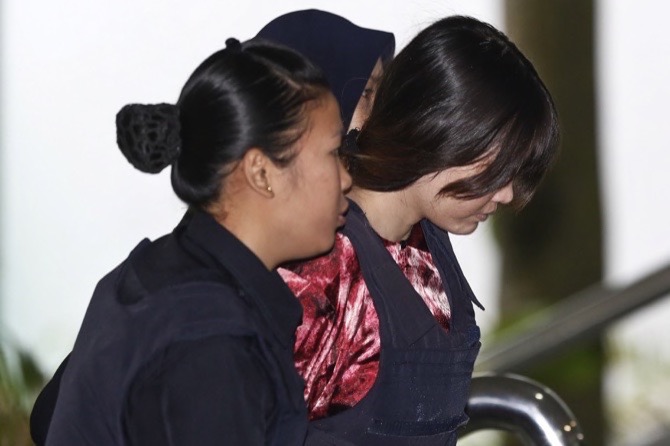 The high-profile trial in Malaysia of two women accused of killing the estranged half-brother of North Korea’s leader resumed yesterday after a seven-week recess, with witnesses taking the stand to verify the authenticity of security camera videos capturing the attack.

Indonesia’s Siti Aisyah, 25, and Vietnam’s Doan Thi Huong, 29, are accused of smearing VX nerve agent on Kim Jong Nam’s face in a crowded airport terminal in Kuala Lumpur last Feb. 13. They pleaded not guilty to murder charges when their trial began Oct. 2. The two are the only suspects in custody, though prosecutors have said four North Koreans who fled the country were also involved.

Prosecutors, who last year showed the security videos to the court, called four employees of the airport and airport hotel to the stand yesterday to explain how they extracted the relevant images from the main computer server and copied them to discs. This was to enable the court to accept the videos as formal evidence.

The court heard that the original videos in the main server were automatically deleted after 30 days.

Prosecutor Muhamad Iskandar Ahmad told the court they will call four more witnesses and that the defense will cross examine a previous witness, the chief police investigator before prosecutors wrap up their case. So far, 29 witnesses have testified.

“Their whole case is based on the CCTV footages and VX, so the admissibility of the footages is very important. But they are taking a very simplistic approach and have failed to examine if the women have any motive,” said Gooi Soon Seng, the lawyer for Siti Aisyah.

Gooi has said Kim’s killing was a political assassination because of involvement by the North Korean Embassy. A police witness has testified that a car used to take the North Korean suspects to the airport on the day of the murder belonged to the embassy. The court also heard that an embassy official met the suspects before they fled and facilitated their check-in at the airport.

If they are convicted, the two women could face the death penalty but not if they lacked intent to kill. That is their defense.

Defense lawyers say the women believed they were playing a prank for a hidden-camera TV show. Prosecutors contend the women knew they were handling poison.

The court has heard that traces of VX were found on the women’s clothing as well as on Huong’s fingernails. An autopsy showed VX on Kim’s face and in his eyes, blood and urine as well as on his clothing and bag. Doctors concluded the cause of death was “acute VX nerve agent poisoning,” and ruled out any other contributing factors.

Kim, the eldest son in the family that has ruled North Korea since its founding, had been living abroad for years after falling out of favor. It is thought he could have been seen as a threat to his half-brother Kim Jong Un’s rule.

Malaysian officials have never officially accused North Korea of involvement in Kim’s death and have made it clear they don’t want the trial politicized.

Prosecutors are expected to rest their case in March. The judge could then decide there is no case against the women, who would be freed or to let the case continue. If that’s his decision, the defense will be called and the trial would last several more months. Eileen Ng, Shah Alam, AP