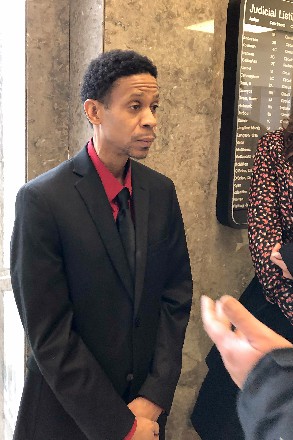 A lawyer for a son of Aretha Franklin asked a judge to keep an eye on professional fees paid by the late singer’s estate, the latest jab in a dispute over assets left by the Queen of Soul.
Separately, the judge set a March 3 hearing on a request by Franklin’s niece to step aside as personal representative, or executor, of the estate.
Franklin died without a formal will in August 2018. Her estate was worth an estimated $17 million last summer, although the family has been squabbling since last spring when handwritten wills were found in her home.
A 2014 document indicates that Franklin wanted Kecalf Franklin (pictured) to run her estate. A niece, Sabrina Owens, now fills the role, but she wants to give up the job, citing a “rift” in the family.
Owens watched from the courtroom gallery as Kecalf Franklin’s lawyer, Charlene Glover-Hogan, asked a judge to step in and approve any legal fees for the estate’s attorneys before they’re paid.
In response, David Bennett said Franklin’s four sons or their lawyers had agreed that his firm would represent the estate, shortly after Aretha Franklin’s death. He denied keeping the sons in the dark.
“This is not a cash-poor estate,” Bennett said.
Judge Jennifer Callaghan set that dispute for another day. She also ordered the parties into mediation.
Outside court, Glover-Hogan said a handwriting expert confirmed that the 2014 document, found under a living room cushion, was in Aretha Franklin’s handwriting. The admissibility of the will, however, hasn’t been determined.
“His mother knew what she was doing,” Glover-Hogan said of Kecalf Franklin’s fitness for the job of managing the estate.

The Art of Giving | Modern philanthropy and globalization

The Art of Giving | Modern philanthropy and the great disruption

The Art of Giving | Modern philanthropy: the love of humankind and social distance