Q&A | Manuel Machado: Portuguese School of Macau President | ‘The school is growing and has established itself in the MSAR’ 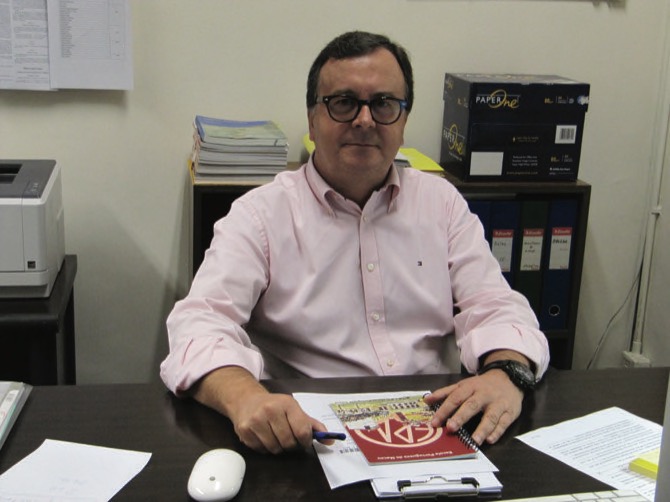 The Portuguese School of Macau (EPM) is celebrating its twentieth anniversary with several events this week, including a show at the Cultural Center tomorrow. In the current school year, the EPM has tutored 577 students from 24 different nationalities. In an interview with the Times yesterday, the school’s president Manuel Machado made a positive assessment of the school’s role and prospects.

Macau Daily Times (MDT) – The Portuguese School of Macau (EPM) is celebrating its 20th anniversary. What is your assessment of the school’s development?

Manuel Machado (MM) – The school obviously had good moments and not so good ones. It began with over 1,100 students and there was a sharp decline in that number during the initial years. Around six years ago that tendency started to revert and the school has had a growth of around 15 students every year. Currently we have 577 students. So, there was a fluctuation in the number of students that had to be accompanied by a fluctuation of the teachers and staff available. Otherwise, one of the major tasks of EPM was to have in Macau a school offering a Portuguese curriculum to the sons of Portuguese who resided here and wanted to continue their university studies in Portugal and elsewhere. The school has always highlighted the teaching of the Portuguese language, but adaptations have been made along the way. As the years progressed, things changed and a lot of Portuguese left Macau. Progressively, a new group of students from other nationalities and cultures entered the school. The school adapted and overall I make a positive assessment [of EPM’s 20 years], given that the school is growing and has established itself in the MSAR. It is recognized and wanted by the different communities that live in this region.

MDT – In the next school year more students are expected and the school may not be able to accept all the applications for the first time because of its size. There’s also an increasing number of students who don’t have a Portuguese background. How can EPM make sure that the quality of Portuguese language teaching is kept at a high standard? Is there a risk of disfigurement?

MM – The tendency [to have students without Portuguese background] has been felt for the past years. The students enrolled in the primary school have different sociolinguistic and cultural backgrounds. The school needs to pay close attention to that in order not to allow, as you said, the disfigurement of the school and its educational project. The school bases itself on the Portuguese curricula with adaptations [to Macau]. For example, last year, we received 60 students in the first year. From those 60, 20 didn’t know Portuguese. Those 20 students were integrated in the three classes available and simultaneously two groups for the preparatory year were created. Those two groups have 14 hours of Portuguese per week. The aim is for them to acquire the linguistic tools needed to follow the [regular] classes. Sometimes this [the preparatory year] is not enough and if that occurs extra Portuguese language support is given in the following years.

MDT – There’s also the issue of the facilities, which are becoming insufficient…

MM – Regarding facilities, we are close to our limit. We expect to have around 600 students next year and have managed to find two extra classrooms for the next school year after renovating existing classrooms. After the next school year, it will be very hard to increase the number of students. The facilities are not matching the students’ growth. Even if there are more facilities, we also can’t take the risk of accepting more students and decreasing the teaching quality. We need to balance quality and quantity.

MDT – So, is there a risk of being unable to accept all the applicants in the future?

MM – Either that or resorting to external facilities, although that is not a solution that pleases me. It wouldn’t be ideal and only in-extremis we would opt for it. But it is preferable to shutting our doors to students and parents who look for us.

MDT – There has been reinforcement in the means allocated to students with special educational needs. Are there more cases requiring that support?

MM – Over the years there have been more cases of students with special educational needs. Those students require specialized support. Around four years ago we started by having a specialized teacher full-time, who was assisted by other teachers working part-time. Last year we hired one more and another two this year. We currently have four [specialized] teachers.

MDT – There are claims that some schools in Macau tend not to accept students with special educational needs. Are you aware of that?

MM – I heard that but it would not be elegant to talk about colleagues from other schools. What I can say is that EPM has always been open to receiving students with diverse problems. What we faced over the years was incapacity to address many situations of that kind. Fortunately we are improving significantly now. […] Currently we have 45 students who were identified as cases with special educational needs. There are other situations arising along the year that require psychological support. We have two full time psychologists who support 111 students, although the number is not stable, because students may have temporary issues requiring short-term support.