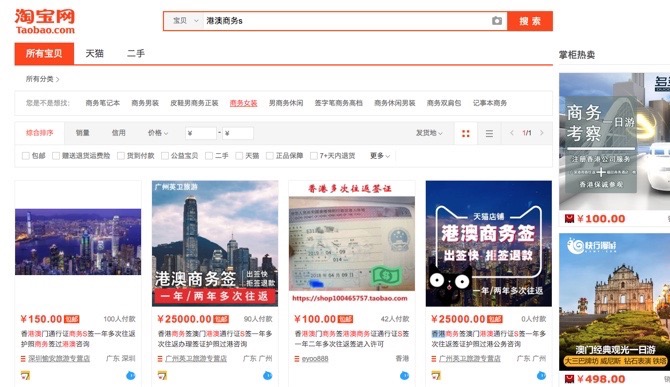 The Macau police authority is referring the matter of Taobao shops selling business visa endorsements (Shangwu) to the relevant governmental department on the mainland for them to ascertain whether there are any illegal activities. The authority noted that, when in compliance with mainland laws and regulations, the acquisition of such a visa via Taobao online shops is legal.

Last month, the Times reported that mainland visitors were acquiring business visas from Taobao shops that grant them frequent access to both Macau and Hong Kong. Visitors can be listed as owners of ready-made companies and obtain these travel permits in exchange for tens of thousands of patacas.

A Shangwu endorsement is applicable to any mainland resident aged above 18 years who wishes to make business trips to either Macau or Hong Kong as an individual. The business visa is good for both single and multiple journeys to Macau or Hong Kong, with its validity from three months up to one year, and each stay lasting no more than seven days.

Mainland residents may purchase a business visit endorsement from a non-governmental authority in compliance with mainland laws. However, a Times investigation revealed that many of these shops do not require evidence of business-related activities in Macau or Hong Kong to process a visa.

According to the Public Security Police Force (PSP), which oversees immigration matters in the Macau SAR, punitive measures will be applied if the activities of these visitors are found to be inconsistent with the purpose of their stay.

“If mainland residents with a Shangwu endorsement are [suspected] of having engaged in any illegal activity in Macau, the police will report them according to the law,” the PSP wrote by email to the Times on Friday, following earlier requests for information on March 12 and 19.

Generally, “the bureau considers that the issuing of mainland travelers’ access to Macau with a Shangwu endorsement should guarantee that the procedure to obtain such visas is in compliance with mainland laws and regulations,” noted the PSP. “If the operation does not violate the law, it should be regarded as legal, and it should be respected and accepted as well.”

However, “if there is any illegal occurrence, it should be handled by domestic authorities.”

“At the same time, the bureau will adopt a series of measures, including entry-banning the above-mentioned people,” added the Macau police authority. “Due to the fact that these people’s purpose to stay in Macau is inconsistent with the status of tourist, the bureau will communicate and report to relevant mainland departments, in order for them to review the legality surrounding the obtaining of such visas, and impose the corresponding measures.”

On March 13, the Times also contacted the Macao Trade and Investment Promotion Institute (IPIM) for a comment with respect to the aforementioned situation. IPIM, which is responsible for issuing different types of visas relating to ‘investment migration’ and ‘technical migration’, has not provided Times with any information, as of press time.

In the three weeks that have passed since the Times first published a report on the suspicious Shangwu endorsements services being offered on Taobao, a number of new shops have opened. As of Friday, some 25 Taobao shops were listed as selling the service.

One shop, named “Jin Yao Shi Shang Wu”, which has no sales and is a newly opened Taobao store with zero accumulated credit, is charging RMB12,800 and RMB14,800 for a Shangwu endorsement to Hong Kong and Macau, respectively. This shop requires only a mainland ID and a travel card.

Though this is not the case for many other Taobao shops on which the Times previously reported, Taobao issued a customer reminder for this particular store, clarifying that “this product does not provide an entry of review, this shop does not keep a record of sales. Be cautious before making an order.”

Ten of the previously mentioned 25 search results were stores located in Zhuhai.

In response to the Times, the PSP said that the bureau does not currently have data to provide on the number of mainland residents who have travelled to Macau with a Shangwu endorsement. Staff reporter