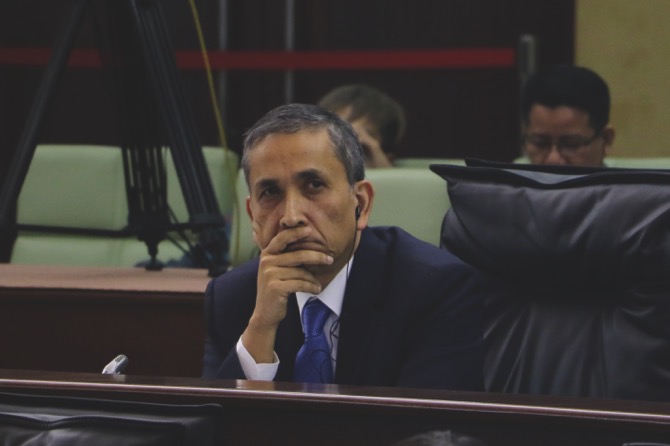 Former lawmaker Leonel Alves, a heavyweight in the legal and political community, is throwing his support behind the list of incumbents at the Lawyers Association (AAM) in the upcoming elections for the barristers’ board and the Advocacy Council. He admitted, however, that Sérgio de Almeida Correia’s bid was positive and made a splash.

In a phone interview with the Times yesterday, Alves said that he supports “continuity in the AAM” for this year’s election because there are no conditions for summoning “a credible alternative list” at this point, alluding to Correia’s candidacy.

“The idea isn’t bad. It is actually good in subjective terms, but not in objective terms [at this time],” he said.

Alves firmly rejects the idea that renewal should come from within, with the support of long- time president Jorge Neto Valente as some lawyers have advocated. “Not at all! We are all lawyers, we think by ourselves. We don’t need [support] canes!”

When questioned if he himself would be a leader for change in the association, Alves said, “Not for now. I have given a lot of my time, decades, to public life. Now is time to pause and receive – I have people working ‘for’ me now,” he remarked with a laugh.

Alves admitted, however, he may return to public service “after some years,” without rejecting the idea of being part of a solution in two-years-time.

Almeida Correia announced at a press conference in mid-September that he decided to run for the top barrister’s post after Valente asked for a “total renovation” of the AAM’s board during an interview with Radio Macau last May.

Valente reversed his previous stance on the matter by saying that the reason behind his decision to re-run was Correia’s candidacy precisely.

In an announcement on TDM-TV, two weeks ago Valente called Correia’s bid one of “confrontation” and “rupture,” while labeling the challenger as “radical” and “corrosive” in his political commentary.

A week later, Correia responded to the criticism on TDM-TV, saying that Valente’s words were “inadequate” and a possible violation of lawyers’ ethics, which states that lawyers should be civil and avoid personal attacks among peers. He reaffirmed that he was running “to fill a void left precisely by constant calls for change” in the AAM board by the top barrister and “his inability to promote that change.”

Some lawyers publicly expressed their support for Correia, while others welcomed the challenger’s bid.

Alves is among the latter, telling the Times yesterday that Correia’s candidacy “was a splash in the water.”

Correia’s candidacy “was positive” and had the merit of launching a serious debate on the renovation of AAM’s bodies, Alves said.

“There was a lot of talk about a challenge for many years but nobody until now had the courage to come forward, challenging the status quo like Mr. Almeida Correia did.”

“We have many years ahead of us to work on the renovation of the board, for the betterment of both the association and Macau, in order to solidify and protect the Rule of Law.”

The elections for the AAM board and the Advocacy Council will be held on the first fortnight of December. The deadline for list submission is October 31.