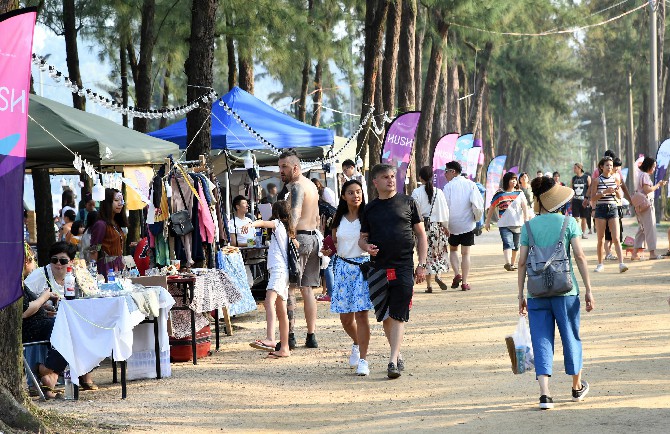 The Cultural Affairs Bureau (IC) has started recruitment for the annual Hush! festival, which will be held in July this year. The announcement, made during yesterday’s regular press briefing on Covid-19-related matters, was apparently unknown to Lo Iek Long, medical director of the public Conde São Januário Hospital (CHCSJ), who could not say whether he or other health authorities had been consulted for health and safety concerns at the popular event.
While the event was formerly held on Labor Day at Hac Sa Beach, this year’s event will be held in several urban locations with the fair at the Macao Science Center.
Its rescheduling comes as the Sports Bureau (ID) has also received the green light to proceed with the annual Dragon Boat Races, on the condition that only local teams participate this year.
When asked whether the IC had received approval or advice from the Health Bureau (SSM) regarding the music event, Lo appeared puzzled and hesitant, before saying that he did not have sufficient information on hand to answer the question.
Macau’s health authorities, cultural departments and public sports entity all fall under the purview of Secretary for Social Affairs and Culture Ao Ieong U.
After reiterating that he did not have sufficient information to answer further questions, he expressed his confidence in his colleagues from other public departments. “When they need to carry out work that is necessary, they will take health and hygiene conditions into account,” the doctor said.
“We have also posted various measures online for various entities to follow,” Lo added. “There are different measures for different [types of] venues.”
The medical doctor added that July is more than one month away, so it may be too early to make any conclusive statements on the health and hygiene conditions.
Leong Iek Hou, coordinator at the local Center for Disease Control and Prevention, reiterated that the SSM, the ID and Municipal Affairs Bureau were in regular discussion regarding reopening sporting facilities such as public swimming pools, basketball grounds and playgrounds.
According to Leong, the health authority has also offered technical advice to other bureaus on health measures. When these facilities are reopened, they will adopt anti-Covid-19 measures currently in effect in other public areas.
On the other hand, besides the Covid-19 nucleic test station at the Taipa Ferry Terminal, the SSM is adding an extra test station from today at the CHCSJ.
The Macau test station, as introduced by Lo, has already been in operation but only offers services for new patients taken in by the hospital. Currently, all new intakes will be tested for the virus before being admitted.
Lo stressed that besides new intakes, the test station will also serve seniors and children, as well as those with disabilities and their caretakers.
“The additional test station is for the convenience of these groups of people,” Lo explained. “It is not a must that they test at the Macau station.”
It is at the test-taker’s discretion to decide which test station to attend. “For example, if the test-taker thinks the Taipa station is more convenient, they can take the test there,” Lo explained. “Indeed, there is a dedicated provisional bus stop, which has greatly improved the degree of convenience.”
When eligible test-takers make a booking for the test, they will have the option to choose between the Macau or the Taipa test stations. The pricing scheme has remained unchanged. From today, test-takers can opt to pay for the test using the mobile payment system, MPay.
“We are in negotiation with other payment systems in the hopes of providing more payment options,” Lo added.