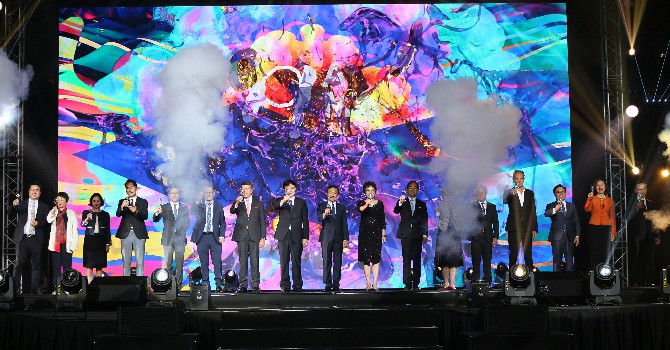 In this October 2019 file photo, organizers of Art Macao and special guests preside over the closing ceremony

Art Macao is canceled this year, the Cultural Affairs Bureau (IC) has informed the Times.
The government-organized mega-event featuring artworks of various forms and spanning a six-month period, will not be returning this year due to limited time for preparation amid the coronavirus crisis.
The IC informed the Times that “the event will not be held this year” because of “the epidemic situation and time constraints”. The bureau also said that further information on the event’s cancellation would be announced in due course.
Dubbed by the government as the largest event of its kind in Macau’s history, the Art Macao festival was inaugurated in May last year. It was held under the patronage of the Secretariat for Social Affairs and Culture, led by former Secretary Alexis Tam, with organizers saying at the time that the event would be held again in the future.
The festival spanned six months and staged more than 50 exhibitions, workshops and performances, counting the contributions of casino operators, private firms, local consulates and international artists.
It was also an example of interdepartmental cooperation. The 2019 Art Macao festival was co-organized by the Macao Government Tourism Office and the IC, with support from the Education and Youth Affairs Bureau and the Higher Education Bureau.
All six casino operators, in addition to the mainland-funded Nam Kwong (Group) Company Limited, assisted by staging their own exhibitions at their properties. In doing so, the festival has linked Macau with big names including Grace Kelly, KAWS, Paul Gauguin and the British Museum.
As the Secretary for Social Affairs and Culture, Elsie Ao Ieong U, is preoccupied with handling work relating to coronavirus transmission prevention. She was appointed by the Chief Executive, Ho Iat Seng, as the vice president of the Novel Coronavirus Response and Coordination Center, a taskforce dedicated to fighting the novel coronavirus infections and working to confine its outbreak.
Work to contain the coronavirus is a priority for many other government departments, spanning the education authority to the tourism board, as well as the casino operators.
The 15-day suspension of gaming activity announced by Ho Iat Seng will dampen gaming revenues in the short-term, potentially making large-scale art projects and other non-core activities of less interest to the concessionaires.
Wynn Resorts CEO Matt Maddox recently disclosed that the company’s Macau properties are losing as much as $2.5 million per day during the suspension. According to some market analysts, Macau’s gaming revenue for the quarter could be down by as much as 50% due to the closure and the subsequent weeks of recovery.
It is unclear for the time being, however, if other events such as the Macao Arts Festival in May, the Macao International Music Festival in October, and the Grand Prix in November will be affected.
In neighboring cities, events of various scales have also been postponed or canceled. One of the most popular art events in Hong Kong, Art Basel Hong Kong, which was set to be held near the end of March, will be canceled in 2020 “due to the severe outbreak and spread of the new coronavirus, which has recently been declared a global health emergency by the World Health Organization.”
The Hong Kong Arts Festival, which will be held in February and March, has also been canceled for the same reason.