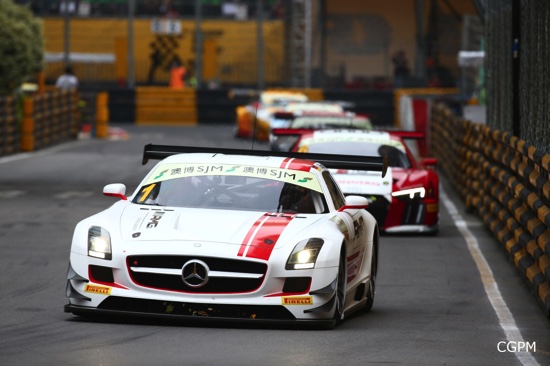 Maro Engel was one of the weekend’s big winners, rising to victory in the Macau GT Cup – FIA GT World Cup, which took place yesterday. It was an eventful race, shortened after two laps due to an unusual crash during the safety car period, bringing the race to an early end.
But the drama did not finish with the end of the race. Afterwards, the organizers decided to penalize Edoardo Mortara, who had finished second. He was given a 20-second penalty due to a “jump start” at the beginning of the race, which resulted in him moving down to sixth position.
The person who benefited most from all this was Mortara’s teammate René Rast, who saw his position upgraded from third to second, while Stefan Mücke from the Craft Bamboo Aston Martin moved up to third position on the podium.
Mercedes-Benz was awarded the manufacturers’ cup.
“It is so, so wonderful, and I’m so, so proud,” said Engel, commenting on the fact that this victory is his second win in a row on the Guia street circuit and the inaugural FIA GT World Cup Drivers’ title.
“I made a big mistake in qualifying, and I thought right there standing by the wall that my weekend might be over and I’d blown the opportunity we had. To win this race today is amazing. I just love this place, I love this track,” Engel said.
For his part, René Rast was pleased with his result in his first event on a circuit that is known as one of the world’s most challenging tracks.
“I felt more comfortable from session to session. I think we had a good pace today. It’s not easy as a rookie, so I’m pretty happy to be here on the podium with these experienced guys,” Rast said. RM