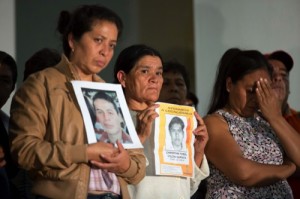 Parents of missing students holding pictures of the disappeared, attend a press conference after a meeting with Mexico’s President Enrique Pena Nieto in Mexico City

Mexican President Enrique Pena Nieto met with parents of 43 teachers college students for the first time since they disappeared over a month ago, when investigators say police detained the students and handed them over to a drug gang.
The mothers and fathers of the missing have grown increasingly frustrated at the pace of the investigation of the Sept. 26 police attack in the city of Iguala, which also left six dead. The case has shaken the image of improving security that the government has sought to project since Pena Nieto took office in 2012.
After meeting for about six hours inside the Los Pinos presidential residence, parents said they told Pena Nieto they did not have confidence in the investigation, and the government agreed to measures including the creation of a commission to monitor the case.
“We are not going to trust the words of the president nor the commitments that were made public … until they present the 43 students to us alive,” Felipe de la Cruz, one of the parents, said at a news conference late Wednesday.
At one point earlier in the day, human rights officials had said the meeting was over but the family members were refusing to leave until Pena Nieto signed a document that would satisfy everyone.
Pena Nieto said in televised remarks that in addition to the commission, made up of both government officials and parents to provide daily updates on the investigation, the government agreed to provide greater support for both rural teachers colleges and the families of those who were killed or wounded in the attack, and to redouble efforts to determine the students’ whereabouts.
“There will be a renewed search plan,” Pena Nieto said.
The relatives came to Mexico City from the Rural Normal School of Ayotzinapa in Guerrero state, where the missing students were enrolled.
Investigators have said the attack was ordered by the former mayor of Iguala over fears that the students planned to disrupt a speech by his wife. Police officers are alleged to have turned the students over to the Guerreros Unidos drug cartel.
Forensic experts have combed through 11 clandestine graves discovered in the area during the hunt for the students. The sites contained 38 bodies, but there has been no confirmation that any of them belong to the missing students. E. Eduardo Castillo and Peter Orsi, Mexico City AP