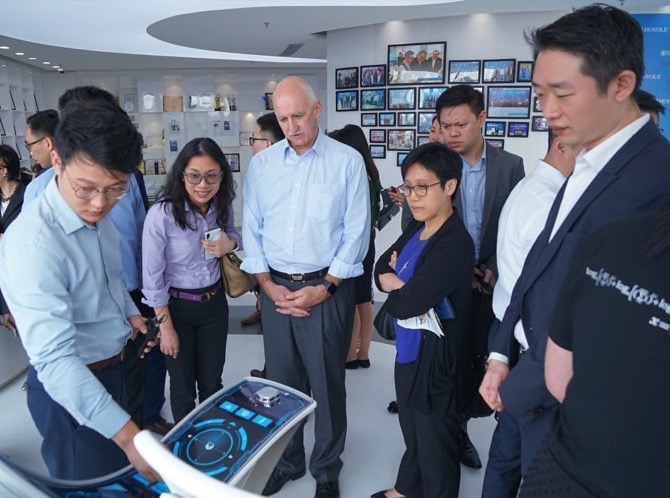 They met with representatives of the Hong Kong and Macao Affairs Office of the People’s Government of Shenzhen Municipality as well as visiting Sea World Culture and Arts Center, Reform and Opening-Up Exhibition Hall, Tencent and many other technology companies. In a press release, MGM said the visit helped them “learning more about the positioning of Shenzhen in the Greater Bay Area, and how the city is becoming a global hub of innovation and creativity.”

Designated as a City of Design by UNESCO, Shenzhen is one of the core engines for the development of the Greater Bay Area.

A “keen advocate of arts and culture,” MGM visited Shenzhen’s new cultural landmark – Sea World Culture and Arts Center – “to understand how public art can be redefined into unique cultural experiences.” The delegation then went to the Reform and Opening-Up Exhibition Hall for an exhibition showcasing thousands of iconic objects related to Guangdong’s development over the past 40 years since the reform and opening-up, as well as the rise of Shenzhen.

In addition, the senior management team visited global innovation and technology enterprises Tencent, Royole and Hytera, and observed the applications and technologies of the Greater Bay Area, such as the use of facial recognition in payment systems, augmented reality and human-machine interface technologies.

According to the company’s communique, they also took the opportunity to meet with representatives of the Hong Kong and Macao Affairs Office of the People’s Government of Shenzhen Municipality, “to discuss how MGM and Macau can grow as the Greater Bay Area develops.”

For Grant Bowie, “Shenzhen continues to evolve and develop. It is truly an all-encompassing city that welcomes all people and competitions. We need to learn from Shenzhen, welcoming more innovations to facilitate new and excellent customer experiences. This visit offer[ed] a great opportunity for our team members to get to know more about Shenzhen’s and how we should position ourselves.”

“We want to challenge and encourage them to never stop exploring and growing their knowledge, and to add value to the grain of sands of MGM, the Macau community, and the Greater Bay Area,” Bowie said.