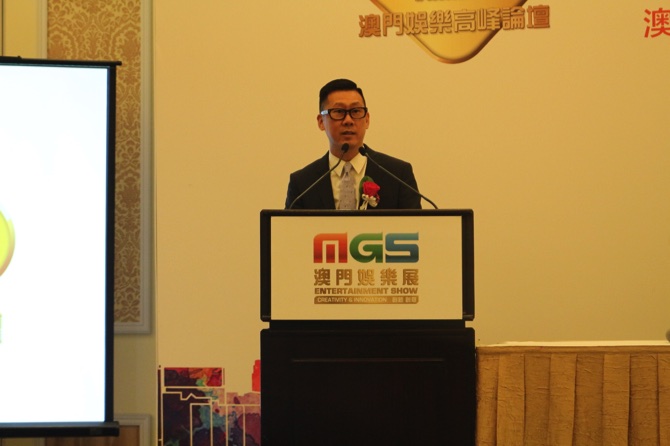 The fourth edition of the MGS Entertainment Show kicked off yesterday with the theme of creativity and innovation.

This year’s exhibition space covers 12,000 square meters with the participation of hundreds of international exhibitors.

The show is doubling its floor size every year, and it is now not only about gaming but also includes entertainment and other services as Macau has diversified its revenue away from gaming only, said Jay Chan, chairman of the event’s lead organization, the Macau Gaming Equipment Manufacture Association (MGEMA).

Cultural and creative districts and areas of emerging technologies are the highlights of the show. A virtual reality bicycle-racing game on display attracted many attendees to give the game a try.

“The gaming industry is one of the most innovative, pioneering and creative sectors in the business world; the MGS [Entertainment Show] is aiming to reflect this,” said Chan.

He noted that the key focus this year is to make the event a home for innovation and creativity, which means attracting the newest platforms and systems in technology and the latest creative ideas behind gaming and entertainment.

A series of seminars and other special events will also be hosted during the three-day exhibition.

Meanwhile, the director of the Gaming Inspection and Coordination Bureau (DICJ) Paulo Martins Chan pledged that the Bureau is working on new standards for the gaming industry in a bid to provide further appraisal standards for junkets’ representatives.

Yet, in a keynote speech he delivered yesterday, the head of the local gaming regulator still seemed to be apprehensive about the gross gaming revenue of the region’s casinos.

“There’s still instability or factors that will affect our economy, so we can’t say that we are already very safe,” Chan said. However, he cited the Bureau’s belief that there would be more stable growth of the region’s gaming revenue in the future.

He noted that they are trying to create an industry that features “integrity and quality,” further noting that the Bureau has been working hard on this vision.

Chan stressed that junkets are a vital component of the whole gaming industry, despite also giving importance to the mass market.

The Bureau’s head also noted that the regulator had finished auditing the financial statements of junket operators in Macau, revealing that some 19 junkets did not meet the new accounting requirements announced this year.

“We have finished the inspection of the accounting system of all 145 junkets. Some of them are not satisfactory,” Chan noted. He announced that the Bureau would monitor improvements until the end of this year, which is the time for reappraisal of junket licenses. MDT/Xinhua