MIECF attracts over 4,700 with 44 agreements signed 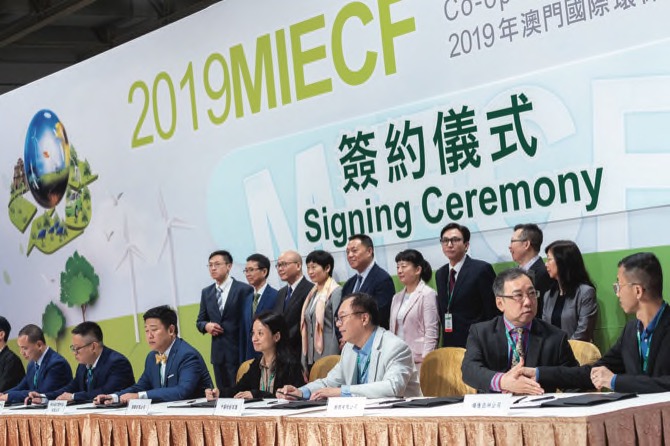 The 2019 Macao International Environmental Co-operation Forum (MIECF) finished on Saturday after a three-day event that attracted over 4,700 people, according to the official figures provided by the organizers. A total of 44 agreements were signed, which resulted from 350 exchange and business contacts made.

Under the main theme of “Promoting Ecological Civilization and Green Development,” this year’s MIECF included a new section called the “Green Innovation Zone,” a special area for the promotion of environmentally friendly products and services in the Greater Bay Area.
As on previous occasions, one of the areas of interest was sustainable improvement, which features the integration of the participating entities into national policies, helping them to seize opportunities for ecological development at the international level.

During the “Green Forum,” a total of eight forums were held and a special session was held with keynote speaker, the founder of Bloomberg New Energy Finance, Michael Liebreich. In addition, the other sessions counted the participation of around 70 environmental pioneers, leaders of multinational corporations and policymakers from seven countries and regions, including mainland China, the Netherlands, Portugal, East Timor, the United Kingdom, Hong Kong and Macau.

The main exhibition area, named “Green Show,” occupied this year a total area of ​​over 16,900 square meters, with more than 500 exhibitors, mainly from the mainland, European countries and the Portuguese-speaking world.

As with previous years, on the last day of the event the “Green Public Day” was held, allowing the general public to participate in activities and performances including promotional and educational activities such as a lucky draw, an environmental workshop, family games, Eco Fun, an exhibition on waste reduction and recycling, and an area of recycled articles.
The mascots of the Environmental Protection Bureau, including Mr Earth, Brother Cloud, Sister Flower, and Baby Spoonbill were present to encourage youngsters in the practice of a green lifestyle.
Another of the new additions of this year was the technical visits, in which guests were led on guided tours to the recycling and waste disposal sites at the Hong Kong-Zhuhai-Macau Bridge border crossing point, in order to observe and learn more about the infrastructure in terms of environmental protection.