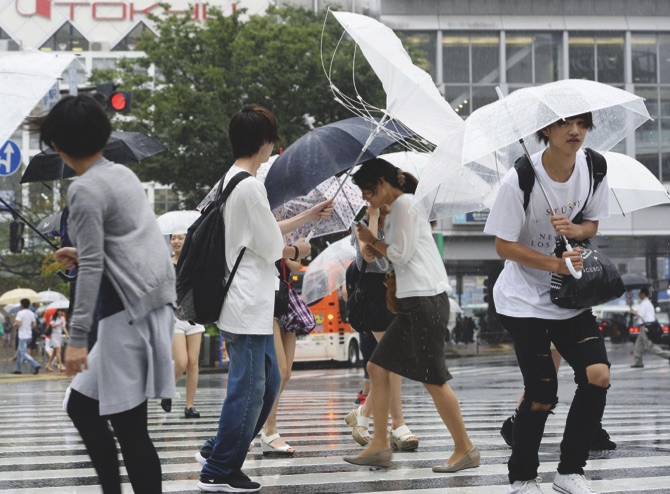 People walk in a strong wind caused by Typhoon Mindulle, in Tokyo, yesterday

One flight from Macau to Tokyo and another from Tokyo to Macau were delayed yesterday due to typhoon Mindulle, which is currently bearing down on Japan, as announced by Air Macau.
As of 3:30 p.m. yesterday, the Airport Authority of Hong Kong (AA) announced that 11 flights between the Hong Kong International Airport and Tokyo’s Narita International Airport had been delayed, in addition to three other flights between Hong Kong and Tokyo’s Heneda Airport.
The strong winds forced the Narita International Airport to shut down. Three tropical storms are currently approaching Japan.
A dispatch from the Associated Press states that strong winds from the typhoon had forced air traffic controllers to temporarily abandon the control tower at Narita International Airport yesterday, shutting down one of Tokyo’s two main airports for about an hour.
Narita was closed at 2:20 p.m. after the controllers left the tower when wind speeds reached 126 kilometers per hour, stated a Transport Ministry official at the airport who would give only his surname, Matsumoto. The airport reopened around an hour later.
It was the first time the tower had been closed because of a typhoon. It has closed once before, during the magnitude-9.0 earthquake that triggered a massive tsunami in March 2011.
Typhoon Mindulle, which has caused a landfall south of Tokyo yesterday afternoon, brought heavy rain and strong winds to Tokyo and surrounding areas.
Eleven people were injured, three seriously, said Japan’s Fire and Disaster Management Agency.
Narita, which is located outside of Tokyo, said that 88 international and 34 domestic departures and arrivals had been canceled. More than 400 domestic flights were canceled to and from Tokyo’s other major airport, Haneda.
Staff reporter/Agencies